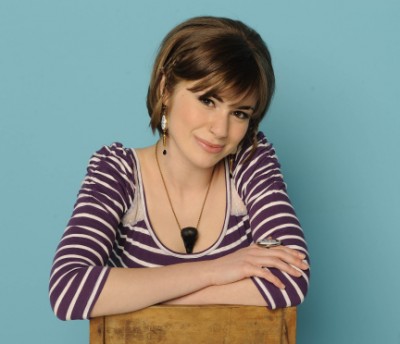 It’s time for the Top 12.  THIS is where the competition really begins.  Man versus woman.  One group and there is no room for mistakes.  This is also the first time the contestants get to use a professional stylist who will help them pull their look together.  Prior to tonight, they were on their own.  Looks are important, but nothing is more important than song choice.  Tonight’s theme is The Rolling Stones and the contestants must choose something from the iconic group’s arsenal.  What will the contestant’s choose?  Be prepared to blown away by 17-year-old Siobhan Magnus (pictured) and one contestant sings with laryngitis (but you would never know it).  I will say now that I am not a fan of this theme b/c I am not a Stones fan, but so be it.  Let’s begin with…

Michael Lynche — “Miss You” — Michael is probably the most comfortable guy on stage.  It seems to come so effortlessly for him.  He has a great falsetto and can hit some pretty high notes.  He does a very respectable performance.  I’m not wowed, but it’s good.   Randy says, “It reminded me how great a performer you have become.”  Ellen says, “That’s the way to start the night.  Amazing.”  Kara says, “[It’s about being] hot on stage and you did that.”  Simon says, “I thought the performance at times, particularly your dancing, was kind of corny.”

Post judging Cowell and Seacrest face off.  Seacrest asks which part of the song Cowell thinks is corny.  Cowell says, “Am I talking to you or to him?”  Seacrest gets in Cowell’s face and says in effect that he is trying to get the guy some constructive criticism so “just do it.”  Simon backs away.  They are part joking and part not.  Simon is phoning it in this season and Seacrest is holding him to the carpet.

A quick commercial break and then…

DiDi Benami — “Play With Fire” — I like DiDi, but I don’t like this song.  It seems very boring, bland.  It’s the same notes again and again.  I don’t think the judges will like this.  Randy says, “I think for the first time in weeks that was one of your best performances.”  Ellen says, “I thought you sounded great and you made the word fire two syllables.”  Kara says, “I think when you push on your vocals, you lose your way a bit…for me, two steps in the right direction.”  Simon says, “You are beginning to show us the kind of artist you want to be…It was a very solid performance.  I think you can still do better than that.”  DiDi replies, “I do too.”  Okay, I was wrong.  They liked it.

Casey James — It’s All Over Now” — This is a song I am not familiar with.  Casey plays the guitar and vocally he is solid.  Randy says, “You’re back to the Casey that I love.”  Ellen says, “For most women, their hearts are going to race just looking at you.  But for people like me, (audience laughs) blondes, it was just fantastic.”  Kara says, “Tonight you were a rock star.”  Simon says, “For me that was like an audition performance… you’ve got to push yourself.”

Lacey Brown — “Ruby Tuesday” — I do not like Lacey Brown’s version of this song.  It seems weak and flat.  I’m not hearing any range in her voice. It’s just okay.  Randy says, “I wasn’t jumping up and down about it…I was actually pleasantly surprised.”  Ellen says, “It was a tiny bit sleepy for me.”  Kara says, “It was 50/50 for me.  Hearing your voice is great, but there were definitely some issues where you didn’t hit the notes right.”  Simon says, “The song was okay.  I kinda feel with you that maybe you kind of have to stop over thinking this.”

Andrew Garcia — “Gimme Shelter” — I don’t think this song does any favors for Andrew.  I have heard his voice in better form and this certainly doesn’t live up to “Straight Up.”  The judges don’t seem fazed.  Randy says, “I love you, but it was just pitchy everywhere.  It wasn’t great.”  Ellen says, “What do I know?  I think that was your best performance yet.”  Kara says, “My thing though…it’s a song about the Vietnam War…it’s the connection that bothered me in that performance.”  Simon asks, “Did you want him to come stage with a tank?”  Simon adds, “I am somewhere in the middle here.  I think you gave it 100%.  I genuinely hope you survive another week.”

Katie Stevens — “Wild Horses” — This is the first time that I feel like Katie Stevens is really a performer.  I think her connection with the song is honest and for 16 her voice is amazing.  In a few years, she will be a powerhouse.  Randy says, “I think you sang that really well…I thought it was a very strong performance.”  Ellen says, “You sounded so good once you got into it.”  Kara says, “It’s never technically perfect with you…it was better than last week, it definitely was.”  Simon says, “That was a very, very clever choice…This is the first time where you connected with a song…well done.”

Tim Urban — “Under My Thumb” — Tim’s vocal stylings remind me of Jason Mraz.  I think he’s too pretty though.  Sorry!  I can see him on Broadway.  I don’t see him as a major recording artist.  His regae rendition of the song is kinda cool.  He seems much more comfortable than he has been.  Randy says, “I didn’t get that, dude.  I didn’t really like that.”  Ellen says, “I felt like I was at a resort and drinking a pina colada and listening to someone sing.”  Kara says, “I have to applaud you for doing something so incredibly different with the song.”  Simon says, “It didn’t work…that song doesn’t work for me with that kind of beat.  I think it was a crazy decision.”

Siobhan Magnus — “Paint It Black” — I think Siobhan is a dark horse in this competition.  Each week she surprises, her voice is so unique and her range is incredible for a 17-year-old.  Stellar performance.  Randy says, “That was hot.”  Ellen says, “You rise above…like Snookie’s poof.”  Kara says, “I am having flashbacks of Adam Lambert.”  Simon says, “It was the standout performance of the night…you had a good night.”

Lee DeWyze — “Beast of Burden” — Lee is incredible.  He does an acoustic, broken down version of this classic.  Ryan says he’s very nervous, but he doesn’t show it.  He sounds great, but he is the third guy tonight to stand with a guitar and sing.  However, his vocals overshadow all of that.  Randy says, “You did a very singer-songwriter thing.  I thought it was dope.”  Ellen says, “I was expecting a tiny bit more from you…a little less than I expected.”  Kara says, “You are growing faster than anybody else on this stage.”  Simon says, “What you did tonight was choose a very safe song, a very forgettable song…the strange thing is that you have an incredible voice.”

Paige Myles –“Honkey Tonk Woman” — To me, Paige is a black Christina Aguilera, and that’s a good thing!  She has this powerhouse voice, but has had trouble finding herself in this competition.  However, tonight I think her performance rocks.  She looks like she is having fun and she belts it out.  Randy says, “You pulled it out.  I liked it.”  Ellen says, “I think you have such great star quality.  You sounded great.”  Kara says, “For someone who’s had issues with their voice this week, I applaud you…the young Paige is back.”  Simon says, Taking {laryngitis} into account, you were amazing…for the moment, we heard the big voice we liked in Hollywood.”  Paige confesses after the performance that her performance was the only one she had all week.  She was saving her voice.  She kicked butt.

Aaron Kelly — ” Angie” — A rough start for Aaron.  The register is too low.  As he gets into the song, the solidness of his voice comes out.  Here, again, is another teenager who is so incredibly talented.  As always, Aaron does his country version of this Stone’s song.  He’s getting better every week.  Randy says, “You were definitely born to sing…I thought it was hot.”  Ellen says, “I thought that was such a great song choice for you…beautiful.”  Kara says, “I beat you up good last week, but you showed me tonight…really great.”  Simon says, “You chose absolutely 100% the right song…what you did cleverly was sing the song within your limits…one of your strongest performances today.”

Crystal Bowersox — “You Can’t Always Get What You Want” — Crystal has kind of a Jewel look going on, but her voice far surpasses Jewel’s.  She gives every song her own style and personality.  She can walk into a studio today an record.  She is so incredibly talented and is here for the long haul.  Randy says, “I love you!  You are always great.”  Ellen says, “You sing with such ease, it’s effortless… but what I have been missing from you is personality.”  Kara says, “It wasn’t your greatest vocal performance, but when you come out, you are so comfortable.”  Simon says, “This is the first time where I think you were beaten by someone and that was Siobhan.”

PREDICTION TIME:  I think ANDREW GARCIA is going home.  He was clearly the weakest performer tonight and hasn’t found his legs at all in Hollywood.  We shall see tomorrow night.  Ke$ha is performing “Blah Blah Blah.”  Until then…MENDHEIM OUT!