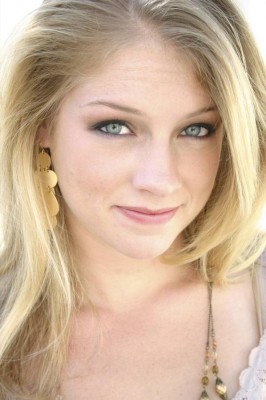 Sorry for the delay, all.  I am very much under the weather.  In any case, on with the show.  It’s Ladies Night once again and there are eclectic songs in the mix.  The judges give us everything from “That was all wrong” to “You are the one everyone has to beat.”  Many missteps and a few people right on the mark, among them, DiDi Benami (pictured) who redeems herself quite nicely after last week’s tongue lashing from the judges.  A complete wrap up of the night, after the jump.

Ellen canoodling with Simon at the top of the show is priceless.   Love it!!!  I think they did it to show there isn’t bad blood between them as it’s been reported in the tabloids.  In any case, it was cute.  What isn’t cute is the first performance of the night.

Katie Stevens – “Breakaway” by Kelly Clarkson – It’s very hard to take a distinctive song and make it your own and Katie proves that she can’t.  It’s karaoke at best.  She’s another victim of being too young to be in this competition b/c she hasn’t figured out who she is yet, vocally.  Randy says, “It’s one of my favorite songs ever written…it paled in comparison…it didn’t work for me.”  Ellen says, “That was the right song for you to sing…you’re young, I didn’t feel those words.”  Kara says, “You have a great radio voice…I don’t think you know who you are as an artist.”  Simon says, “You’ve had an awful lot of advice.  You’ve taken the advice.  You look 100% better than you did two weeks ago…you kind of sucked the energy out of that song…but I have to give you a 10 out of 10 for trying.”

Siobhan Magnus – “House of the Rising Sun” by The Animals – This song has special meaning for Siobhan.  It’s a favorite of her father’s.  As great as she sings it and she does sing it well with those magnificent pipes she has, this was the wrong song, I think.  She needs to be current and singing a 1960’s hit that feels like it should be on Broadway is not the way to go.  I don’t think the judges will be happy with this.   Randy says, “I love what you do, but you take every risk, every chance…that was hot!”  Ellen says, “You are why I love music.  It’s supposed to move you.  It’s supposed to do what you just did…you’re spectacular.”  Kara, “I love the acapella vibe at the front…week to week I am surprised by you.”  Simon says, “I was underimpressed.  I thought you were so much better last week.  There were no moments in that.”

Lacey Brown – “The Story” by Brandy Carlisle – This performance feels very boring.  It’s just plodding along.  Lacey has a decent voice, though.  Judges?  Randy says, “The song was a little sleepy, but it’s your best performance for me in a long time.”  Ellen says, “That song sounded like it was written for you.”  Kara says, “Effortless singing..this is the kind of record you need to be doing.”  Simon says, “I have to say I didn’t love the song, but you sang it really well…for me, I haven’t heard the right song connection yet.”

Katelyn Epperly – “I Feel The Earth Move” by Carol King – I like Katelyn.  I can hear her on the radio.  She has a good personality and a great voice.  I like her version of Carol King’s classic.  She adds her own spin.  Randy says, “I just didn’t feel the right connection or vibe.  There was nothing special about it.”  Ellen says, “I don’t know if that was the right song to choose.”  Kara says, “I didn’t feel like you were competing tonight.”  Simon says, “Let me start with a positive.  I like your hair.  On the downside, it was kinda like request night on a Friday night in a restaurant… This may have been a mistake for you tonight.”

DiDi Benami – “Rhiannon” by Fleetwood Mac – DiDi does an acoustic version of this classic song.  You can hear the intracasies in her voice and I love it.  It’s subtle, but very sexy.  I would download this.  Randy says, “I’m not sure there was a wow moment in it.”  Ellen says, “To that I say yes indeed, DiDi… I like what you did with it.”  Kara says, “One of my favorite moments of the show this season.”  Simon says, “DiDi, I have to agree with Kara.  I thought that was head and shoulders above anything else we’ve seen tonight.”

Paige Miles – “Smile” by Paige Miles – Why in the world did Paige choose this song?  Her voice is so much bigger than this.  Poor choice of song and a bad performance.  Paige.  Paige.  Paige.   Randy says, “It just didn’t work…it just went completely flat.”  Ellen says, “It was sad and heavy and you have such a great personality and we didn’t get to see it.”  Kara says, “What can I say?  It was just all wrong.”  Simon says, “A horrible choice of song.  The arrangement, to be fair, was awful… I think this could be the end of the road.”

Crystal Bowersox – “Give Me One Reason” by Tracy Chapman – WOW!  WOW! WOW!  Crystal rocks this song.  Her soulful take is awesome.  She puts her grunge girl spin on it and takes it to the next level.  She’s in it to win it.  Randy says, “Love that.  Love you.  Love the song…that was hot.”  Ellen says, “I need new adjectives for you…best performance of the night.”  Kara says, “Every time you step up there, it’s easy for you cause you know [who you are].”  Simon says, “You’ve got confidence…right now, you are the one everyone has to beat.  It’s yours to lose.”

Lilly Scott – “I Fall To Pieces” by Patsy Cline – I think Lilly has a unique voice, but I hate her rendition of this Patsy Cline hit.  Patsy is an original and can’t be duplicated.  Lilly just sounds like a high-pitched singing a grown woman’s song with no emotion or connection.  Randy says, “Good job, well done.”  Ellen says, “Love your voice, your style.”  Kara says, “You made Patsy Cline feel current.”  Simon says, “I think you are very brave for choosing that song…that didn’t have the wow factor.”

PREDICTIONS of who is leaving:  Katie Stevens and Paige Miles.

Wednesday night, the guys.  Bring it on.  Until then, MENDHEIM OUT.