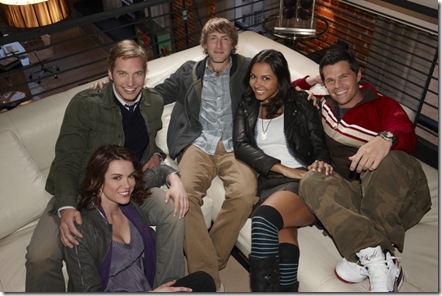 Actress Danneel Harris (bottom left) is having a very good month of May. It started out with the stunning 31 year old actress being once again included in the Maxim Hot 100 List, this time coming in at #72 on the Hot List.  This weekend she had her new NBC pilot series, Friends With Benefits picked up for the regular fall TV schedule and she attended a wedding–her own.

Harris, who recently appeared in the highly successful film, The Back Up Plan, stars in the half hour single camera comedy Friends With Benefits as Dr. Sara Maxwell. Maxwell is a single woman who is just looking for a man to settle down with and raise a family.

While her character will be looking for “Mr. Right” in Friends With Benefits, Danneel Harris has apparently already found her’s. She wed Supernatural actor Jensen Ackles in Dallas, TX this weekend. Harris and Ackles dated for three years before he proposed to her last October.

“Friends With Benefits”, whose storyline revolves around a group of twenty-something singles as they navigate the difficult, and often confusing, world of dating, was developed for television by Emmy winner Brian Grazer (A Beautiful Mind). The series also stars Ryan Hanson as Ben Weymouth, a man who is on the hunt for the perfect woman who meets his unique set of standards, Ian Reed Kesler as the womanizing Hoon and Jessica Lucas as straight shooter Riley who are all distracted with their own dating trials and tribulations.

NBC released a statement that the role of the character Aaron, who is a romantic at heart and doesn’t approve of the “friends with benefits” choice between Sara and Ben, who was played in pilot by Fran Kranz (Dollhouse), is being recast. No reason was given for the casting change or who will take over the role. This is not the first time that this series has undergone a casting change. Before the pilot went into production back in April, actor Patrick J. Adams was replaced by Ryan Hanson.