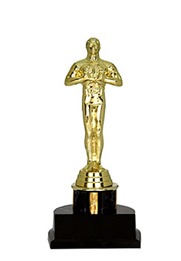 Turner Classic Movies has come up with a great way to celebrate the Academy Awards®. As part of its annual 31 Days of Oscar® showcase in February 2104, TCM will be presenting Oscar, a documentary that traces the history of the Oscars®.

Oscar will premiere on Satyrday, Feruary 1, 2014. Follow the jump for more details from the official press release.

Oscar, Produced by Telling Pictures Inc., in Association with the Motion Picture Academy, To Premiere in February 2014, During TCM’s Annual 31 Days of Oscar; CNN Films to Encore the Film

Turner Classic Movies (TCM) is gearing up to celebrate the Academy Awards® in a very special way next year. As part of TCM’s annual 31 Days of Oscar® showcase in February 2014, the network will present the world premiere of Oscar, a brand-new documentary tracing the history of the Academy Awards. Produced by Telling Pictures, Inc., in association with the Academy of Motion Picture Arts and Sciences (The Academy) and Hollywood Newsreel, this fascinating special will take movie lovers on a journey through Hollywood history as it tells its story of the little statuette that became the industry’s most coveted prize.

Oscar is set to have its world television premiere on TCM Saturday, Feb. 1, the opening night of the 2014 edition of 31 Days of Oscar. With the new documentary as its centerpiece, 31 Days of Oscar will be themed around the history of the Academy Awards. Featuring more than 300 Oscar-winning and nominated films, the month-long showcase will take a deep look into the world’s oldest, most important and most prestigious film award. Each night’s lineup will feature a complete set of nominated films that faced each other in a particular category, beginning Feb. 1 with all 10 Best Picture nominees from 1939: Gone with the Wind, The Wizard of Oz, Goodbye Mr. Chips, Of Mice and Men, Ninotchka, Wuthering Heights, Stagecoach, Mr. Smith Goes to Washington, Dark Victory and Love Affair.

Oscar is being written, directed and executive-produced by Oscar-winning filmmakers Rob Epstein and Jeffrey Friedman (Common Threads: Stories from the Quilt). Christopher Pavlick and Rick Spalla are also producing. The documentary is one of several major programming events leading up to TCM’s 20th anniversary in April 2014.

To bring its story to life, Oscar will be packed with great moments from 85 years of Academy Award ceremonies, which were first held at the Hollywood Roosevelt Hotel, now home to the TCM Classic Film Festival each spring. The special will also feature extensive clips from Oscar-winning and nominated films, plus exclusive, behind-the-scenes ceremony footage from the archives of Hollywood Newsreel, much of it never shown before. CNN Films will air the encore presentation of the documentary on CNN, following the film’s first broadcast on TCM.

In addition, Oscar will feature an interviews with frequent Academy Award ceremony host Billy Crystal (When Harry Met Sally…), ceremony producer Don Mischer and head writer Bruce Vilanch, as well as former Academy executive director Bruce Davis and cinematographer and Board of Governors member John Bailey (As Good as It Gets). The special will also include a chat with TCM host, author and Academy Awards historian Robert Osborne, whose book 85 Years of the Oscar: The Official History of the Academy Awards is set to be released Oct. 29 from Abbeville Press.

Oscar will not only tell the history of the Academy Awards, but also highlight the relationship between the honored movies and major historical events and trends. Woven throughout the narrative will be segments about the major categories, including Best Actor, Best Actress, Best Director and Best Picture, as well as sidebars about the annual parade of fashions on the red carpet, memorable host monologues and emotion-packed tributes.

"We’re delighted to partner with TCM on this extraordinary 85-year history of the Academy Awards," said Academy President Cheryl Boone Isaacs. "Rob and Jeffrey are in the midst of producing a fantastic showcase of special Oscar moments that will take audiences on a memorable cinematic journey."

"I can think of no better way to celebrate more than 85 years of Oscar than by telling the story of the Academy Awards," said Jeff Gregor, general manager of TCM and chief marketing officer for TCM, TNT and TBS. "And there’s no network that can tell that story like TCM. We’re proud to make the February 2014 premiere of Oscar the centerpiece of TCM’s annual 31 Days of Oscar, where it will be surrounded by a carefully curated lineup of more than 300 Academy Award-winning and nominated films."

Oscar is one of several major programming events leading up to TCM’s 20th anniversary in April 2014.

About the Academy of Motion Picture Arts and Sciences

Connect with the Academy

Rob Epstein and Jeffrey Friedman are among the few directors, writers and producers in the independent film world traversing non-fiction and scripted narrative. Their films together include the recently released Lovelace, starring Amanda Seyfried, Peter Sarsgaard and Sharon Stone and the upcoming short documentary The Battle of amfAR.

Epstein and Freidman’s partnership began in 1987, when they opened an office in a former convent and Catholic girl¹s school in San Francisco and founded Telling Pictures. Their films have screened throughout the world in movie theaters, at major film festivals (including Sundance, Berlin, Venice, Telluride, Toronto and New York) and on television and home video. Between them they have received two Academy Awards, five Emmys, three Peabodys and Guggenheim and Rockefeller Fellowships.

Their other films together include Common Threads: Stories from the Quilt (Academy Award, Feature Documentary, 1989); Where Are We? (Sundance Documentary Competition, 1991); The Celluloid Closet (Emmy® for directing, Peabody, duPont-Columbia Awards, 1995); Paragraph 175 (Sundance Film Festival jury award for directing, 2000) and the feature film HOWL.

Prior to their partnership, Epstein directed the Oscar-winning classic The Times of Harvey Milk. For television, they produced and directed episodes of Crime & Punishment (2001-02), the HBO series America Undercover and Real Sex, and program segments for ABC, PBS and MSNBC.

Retrospectives of Epstein and Friedman’s work have been curated at the Institute for Contemporary Art in London, the Taiwan International Film Festival and CameraImage in Poland.

Turner Classic Movies (TCM) is a Peabody Award-winning network that presents great films, uncut and commercial-free, from the largest film libraries in the world. TCM, which is available in more than 85 million homes, features the insights of hosts Robert Osborne and Ben Mankiewicz, plus interviews with a wide range of special guests. Currently in its 20th year as a leading authority in classic film, TCM offers critically acclaimed original documentaries and specials; film series like The Essentials, hosted by Robert Osborne and Drew Barrymore, and Friday Night Spotlight; and annual programming events like 31 Days of Oscar® in February, Summer Under the Stars in August and TCM Essentials Jr. during the summer. TCM also connects with movie fans through such events as the annual TCM Classic Film Festival in Hollywood, the TCM Classic Cruise and the annual Road to Hollywood tour, as well as through the TCM Classic Film Tour in New York City. In addition, TCM produces a wide range of media about classic film, including books and DVDs, and hosts a wealth of online through the TCM website, which includes the TCM Movie Database, message boards, blogs and more.