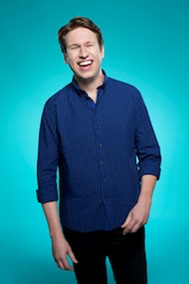 TBS‘s new late-night series The Pete Holmes Show – which launches Monday, Oct. 28, following CONAN – will feature a variety of stars from the entertainment, comedy and sports world during its first two weeks. The Pete Holmes Show will showcase the comedian’s wide-ranging skill set. The series will pack live comedy, in-studio guest interviews, sketches and video pieces into a fast-paced half hour. The first two weeks are as follows:

Named one of Variety‘s Top 10 Comics to Watch, Pete Holmes hosts the You Made It Weird podcast, which was named one of the Top Ten Podcasts of 2012 by both The Onion AV Club and Paste magazine. Since 2011, he has starred in CollegeHumor.com’s hilarious and extremely popular series of Batman parodies. Pete also provides the voice for the talking baby in the award-winning e*trade ad-campaign.

TBS is basic cable’s reigning champion among young adults in primetime. Available in 100 million households, TBS features original primetime comedy series like Cougar Town, Men at Work, Sullivan & Son, Deal With It, King of the Nerds, Who Gets the Last Laugh?, Deon Cole’s Black Box and the upcoming Ground Floor, CeeLo’s Goodie Life (working title) and Trust Me, I’m a Game Show Host, as well as American Dad!, which will become a TBS original series in late 2014. In late night TBS, is home to the Emmy®-winning series CONAN, starring Conan O’Brien, and The Pete Holmes Show. TBS also features an outstanding slate of contemporary comedies, such as The Big Bang Theory and Family Guy, along with blockbuster movies and championship sports.