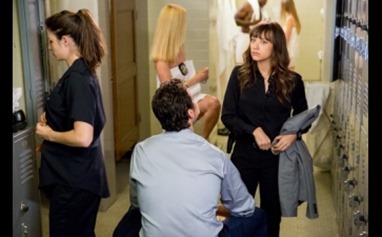 Angie Tribeca (pictured) features Rashida Jones and Jere Burns as, respectively, a lone wolf who’s not thrilled about being assigned a partner, and the boss who assigns her that partner. Buzzy’s is set in a barbershop and centers on a group of coworkers who all went to high school together but now run in very different crowds. Follow the jump for more details.

TBS has given the greenlight to the character-driven police comedy Angie Tribeca (working title), the brainchild of Steve and Nancy Carell. Rashida Jones (The Office, Parks and Recreation) stars in the satirical look at police procedurals, along with Jere Burns (Justified, Dear John), Deon Cole (CONAN, Funny Business) and Andree Vermeulen (Laid Off, NTSF:SD:SUV). Angie Tribeca is being executive-produced by Steve and Nancy Carell through their Carousel Television, along with Campbell Smith (The Daily Show with Jon Stewart) and Thom Hinkle (I Bet You). Steve and Nancy Carell also wrote the pilot, which was directed by Steve Carell.

TBS has ordered 10 episodes of Angie Tribeca, which is slated to premiere in 2015. The single-camera comedy focuses on an eccentric but brilliant group of LAPD detectives who investigate crime, reveal way too much personal information and refuse to rest until justice has been served…sort of. Jones plays Angie Tribeca, a lone wolf who’s capable, committed, strong and not thrilled when her boss (Burns) tells her she has to work with a partner (Macarthur).

"Angie Tribeca is a hilarious spoof of police procedurals in the spirit of The Naked Gun, with a terrific cast and a wickedly funny point of view," said Michael Wright, president, head of programming for TNT, TBS and Turner Classic Movies (TCM). "We’re proud to be working with the outstanding comedy talents behind Angie Tribeca, especially Nancy and Steve Carell and the incredibly talented Rashida Jones."

TBS Greenlights Buzzy’s, Workplace Comedy from Creators of Will & Grace

TBS has greenlit the workplace comedy Buzzy’s, the latest series from David Kohan and Max Mutchnick, the Emmy®-winning creators of Will & Grace. Ashley Tisdale (High School Musical), Mike Castle (Family Trap), Lauren Lapkus (Orange Is the New Black), Ryan Pinkston (Tower Prep), Matt Cook (True Blood) and six-time Emmy® nominee George Wendt (Cheers) star in the ensemble comedy, which comes to TBS from KoMut Entertainment in association with Warner Horizon Television. Kohan and Mutchnick serve as executive producers on the series and penned the pilot, which was directed by James Widdoes (Two and a Half Men).

TBS has ordered 10 episodes of Buzzy’s, with plans to launch the show in 2015. Set in Charlestown, Mass., the multi-camera comedy centers on a group of coworkers who all went to high school together but ran in very different crowds. Now they find themselves working together at Buzzy’s, a barbershop that was recently bought by one-time loser Ben (Pinkston). Since taking over the establishment, Ben has become the boss to many of his old classmates, and he’s not afraid to flaunt his more powerful position.

Ben’s staff at Buzzy’s includes Mo (Cook), his best friend and total opposite. Mo sees the best in people, which explains why he’s been able to put up with Ben since childhood. Also working at Buzzy’s are A.J. Salerno (Castle), the popular kid who was once a great baseball player until a shoulder injury pulled him out of the game and into the barber shop; Danni (Tisdale), who could be doing bigger things with her life if she weren’t too busy trying to figure out if a fling with A.J. on prom night means they’re more than just friends; and Joy (Lapkus), the eternally optimistic receptionist and the object of Mo’s affections…even though she’s already taken. The pilot episode also features guest star Diona Reasonover (Shane Dawson TV).

In addition to his regular staff, Ben has arranged for the barbershop’s former owner, Buzzy (Wendt), to stay on board. Through his many decades as behind the barber’s chair, Buzzy has become as much an institution as the place that bears his name.

"With its unique setting, terrific cast and sharp writing, Buzzy’s puts a fresh spin on the workplace comedy," said Michael Wright, president, head of programming for TNT, TBS and Turner Classic Movies (TCM). "We’re especially excited to be marking our first venture with executive producers Max Mutchnick and David Kohan, whose Will & Grace stands as one of the funniest sitcoms ever made."

TBS is basic cable’s reigning champion among young adults in primetime. Available in 101 million households, TBS features original scripted comedies like Cougar Town, Ground Floor, Sullivan & Son and Men at Work, as well as American Dad!, which will become a TBS original series in late 2014. TBS also features original unscripted series like King of the Nerds, Deal With It and Bam’s Bad Ass Game Show, as well as the upcoming CeeLo Green’s The Good Life and Funniest Wins. In late night TBS, is home to the Emmy®-winning series CONAN, starring Conan O’Brien, and The Pete Holmes Show. The TBS lineup also includes popular contemporary comedies, such as The Big Bang Theory and Family Guy, along with blockbuster movies and championship sports.