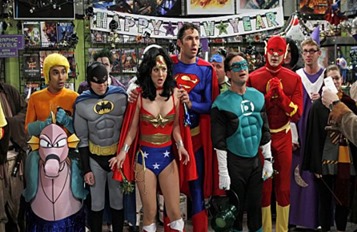 Not looking for scary movies for Halloween? TBS has you covered with four Halloween-themed episodes of The Big Bang Theory beginning at 9/8C. Follow the jump for details.

TBS invites viewers to spend Halloween with the funniest geeks on television as the network presents four popular, Halloween-themed episodes from the award-winning sitcom The Big Bang Theory. The episodes will air on TBS Thursday, Oct. 31, beginning at 9 p.m. (ET/PT). Here’s the complete schedule

9:30 p.m. – "The Codpiece Topology" – Seeing Penny with another guy sends Leonard back to Leslie Winkle (Sarah Gilbert), much to Sheldon’s dismay.

10 p.m. – "The Justice League Recombination" – The guys get Zack and Penny to join their Justice League costume for a New Year’s Eve bash at the comic book store.

10:30 p.m. – "The Good Guy Fluctuation" – Sheldon tries to spook his friends on Halloween.

About The Big Bang Theory

The Big Bang Theory centers on brilliant physicists Leonard (Johnny Galecki) and Sheldon (Jim Parsons), the kind of brilliant minds that understand how the universe works. But none of that genius helps them interact with people, especially women. All this begins to change when a free-spirited beauty named Penny (Kaley Cuoco) moves in next door. Sheldon, Leonard’s roommate, is quite content spending his nights playing Klingon Boggle with their socially dysfunctional friends, fellow CalTech scientists Howard Wolowitz (Simon Helberg) and Rajesh Koothrappali (Kunal Nayyar). However, Leonard sees in Penny a whole new universe of possibilities … including love.

TBS is basic cable’s reigning champion among young adults in primetime. Available in 101 million households, TBS features original scripted comedies like Cougar Town, Sullivan & Son and Men at Work, as well as the upcoming Ground Floor and American Dad!, which will become a TBS original series in late 2014. TBS also features original unscripted series like King of the Nerds, Deal With It and Trust Me, I’m a Game Show Host, as well as the upcoming CeeLo’s Goodie Life (working title). In late night TBS, is home to the Emmy®-winning series CONAN, starring Conan O’Brien, and the new late-night series The Pete Holmes Show. The TBS lineup also includes popular contemporary comedies, such as The Big Bang Theory and Family Guy, along with blockbuster movies and championship sports.