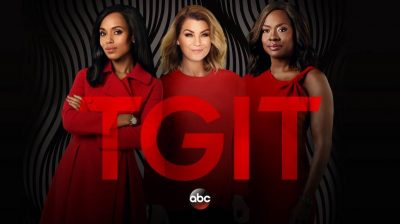 There’s even a teaser trailer!

Music Superstar Adds Even More Intrigue to One of TV’s Most Buzzed-About Nights With Debut of New Song on Thursday, November 9

Music superstar Taylor Swift continues her groundbreaking collaboration with ABC with a special performance of a new song to air during TGIT on Thursday, Nov. 9, on The ABC Television Network, followed by an extended version on Freeform the following day. The world premiere event coincides with the release of Swift’s highly anticipated new album, reputation, later that night at midnight. It will be Swift’s first performance of a new song in three years and marks the singer’s first television appearance in promotion of her sixth studio album.

The three-minute performance will air during regularly scheduled primetime programming Nov. 9, kicking off with the milestone 300th episode of “Grey’s Anatomy” at 8 p.m. EST, followed by “Scandal” at 9 p.m. EST, and “How to Get Away with Murder” at 10 p.m. EST. Swift’s performance of this never-before-heard song will air during “Scandal.”

As part of the 10-time Grammy winner’s new album rollout in collaboration with Disney|ABC Television, an extended version of this performance will air exclusively on Freeform the following day, Friday, Nov. 10.

A sneak peek of a promo announcing the performance was shown exclusively on “Good Morning America” today. The tantalizing 15-second spot will be featured in primetime tonight during “Grey’s Anatomy,” which airs at 8 p.m. EST (see promo link above).

The ABC event is presented by AT&T in conjunction with their multi-year, multifaceted relationship with Swift. AT&T is bringing Swift’s fans a first-ever, intimate look at the creative process behind reputation with the release of the multipart series, “The Making of a Song.” The full series is available only from AT&T on Taylor Swift NOW, beginning Nov. 13.

About Taylor Swift
Taylor Swift’s chart-topping first single, “Look What You Made Me Do,” from her critically acclaimed sixth album, reputation, broke multiple records within hours of its release. With over 10 million streams, it is the most-streamed song in a one-day period ever, the lyric video for “Look What You Made Me Do” broke the standing record with over 19 million views, while the music video shattered the original most viewed video (28 million) record with 43.2 million views in only 24 hours.

Taylor is the only artist in history to have three albums selling over one million copies in their first week of release (2010’s Speak Now, 2012’s RED and 2014’s 1989). Taylor is a ten-time GRAMMY winner, a singer, songwriter, musician and producer. She is the youngest person in history to win the music industry’s highest honor, The GRAMMY Award for Album of the year and she is the first female solo artist to win this prestigious award twice. Rolling Stone listed Taylor as one of the 100 Greatest Songwriters of All Time. Time magazine has named her one the of the 100 Most Influential People in the world and one of only eight candidates for their most prestigious honor, 2014 Person of the Year. A Brit and Emmy award winner, Taylor is Billboard’s youngest-ever Woman of the Year and the only artist to have been awarded this honor twice.