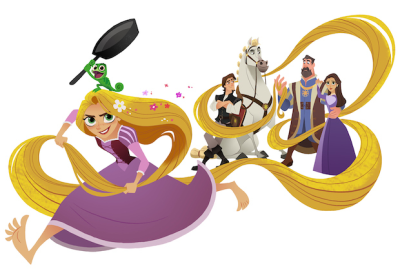 Ashley Judd, Richard Kind and Jeffrey Tambor lead a host of additions to Disney Channel’s Tangled: Before Ever After.

Also joining the cast are: Eden Espinoza as Rapunzel’s handmaiden and confidant, Cassandra; Jeff Ross, as Hook Hand’s brother, Hook Foot, Paul F Tompkins – returning to the role of Shorty, and M.C. Gaines, back from the movie as Captain of the Guards – among others.

Reprising their roles from the feature film are Jeffrey Tambor (“Transparent”) and Paul F. Tompkins (“Anchorman”) as Big Nose and Shorty, members of the Snuggly Duckling Pub Thugs; and M.C. Gainey (“Lost”) as Captain of the Guards.

As previously announced, “Tangled: Before Ever After” is set between the events of the feature film and the start of the 2012 short film, “Tangled Ever After.” Premiering in 2017 on Disney Channels around the world, the series unfolds as Rapunzel acquaints herself with her parents, her kingdom and the people of Corona.

Walt Disney Animation Studios’ 50th animated feature “Tangled” introduced audiences worldwide to long-locked Rapunzel and charming bandit Flynn Rider in one of the most hilarious, hair-raising tales ever told. Debuting over Thanksgiving in 2010, “Tangled” opened with $68.7 million and went on to earn $200 million domestically and more than $593 million globally, becoming one of Walt Disney Animation Studios’ biggest releases of all time. Featuring music by Alan Menken and Glenn Slater, the film was nominated for Golden Globe® and Critics Choice awards for best animated film, as well as best song for “I See the Light,” which also won a Grammy® Award and was nominated for an Academy Award®. Rapunzel, Flynn and their friends Pascal and Maximus returned to the big screen for a royal wedding in the 2012 short film “Tangled Ever After.” Guests can experience the magic of “Tangled” at Disney Parks around the world, including dazzling encounters with Rapunzel herself at Magic Kingdom, Disneyland, and Hong Kong Disneyland. Rapunzel is not only one of the top-selling roleplay dresses at Disney Store but one of the most popular Disney Princess characters overall across licensed, Disney Store and Disney Publishing merchandise