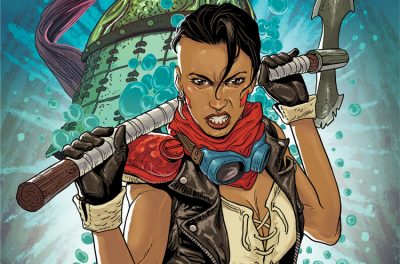 This winter, an ancient evil will stir in a brand-new saga of honor, love, and savagery that’s centuries in the making with The Forgotten Queen #1 – featuring covers by Kano (Quantum and Woody!), Viktor Kalvachev (Pherone), and Veronica Fish (Spider-Woman).

Issue #1 of the Valiant four-issue limited series will be in comics shops on February 27, 2019.

A special bundle of the complete series will include greatly expanded editions – with a host of additional features. Details and first look pages follow.

END_OF_DOCUMENT_TOKEN_TO_BE_REPLACED

The fourteenth issue of BOOM! Studios’ hit comic WWE will the beginning of two important arcs – the Women’s Evolution arc and a four part chronicle of the rise of Japanese wrestling star Asuka, from her days at NXT to her current prominence with WWE RAW.

Written by Tini Howard and illustrated by Hyeonjin Kim, WWE #14 will be in comics shops and the BOOM! Studios webstore in February, 2018.