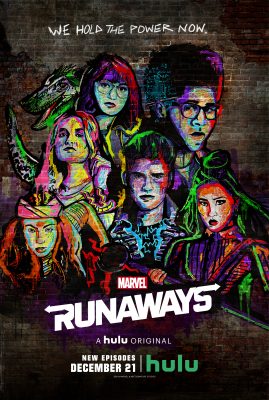 PRIDE wants to bring their children back; the kids want to fix what their parents broke, and Jonah wants… what, exactly? And what all this about an earthquake?

Season 2 of Marvel’s The Runaways has a spiffy new trailer that even includes a dinosaur in a shopping cart!

END_OF_DOCUMENT_TOKEN_TO_BE_REPLACED

Every teenager thinks their parents are evil. What if you found out they actually were?  Marvel’s Runaways is the story of six diverse teenagers who can barely stand each other but who must unite against a common foe – their parents.