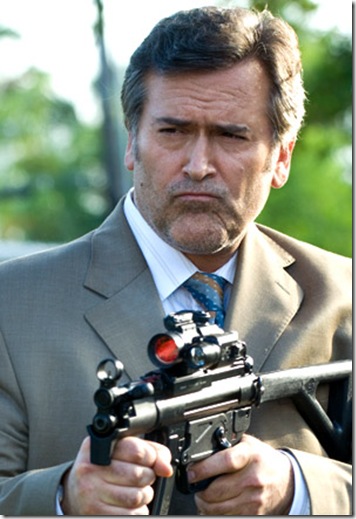 USA’s popular spy series, Burn Notice, is returning this week [Thursday, 10/9C] and we had the opportunity to chat with Bruce Campbell [crusty, semi-retired spy Sam Axe] on what to expect in Season Three. Campbell didn’t dip into any classified intel, but it was definitely a fun interview…

END_OF_DOCUMENT_TOKEN_TO_BE_REPLACED

Burn Notice’s first season concluded with former spy Michael Weston trapped inside the cargo trailer of an eighteen wheeler. When season two begins tomorrow [Thursday, USA, 10/9C], the little exercise in claustrophobia results in Weston [Jeffrey Donovan] being given an assignment – over the phone – by the mysterious Carla [Tricia Helfer] before the trailer is opened onto a scene of carnage. Spies. Whatcha gonna do?

Breaking and Entering, the second season premiere, deals with stealing information from a civilian military [mercenary] company. If it’s not done by a certain time, it will result in the death of the wife and child of the man who set up the firm’s security. The carnage that greets Michael when he clambers out of the trailer is what remains of the computer expert, Richie’s effort to flee. Plus, there’s always Michael’s manipulative mom [Sharon Gless], fellow ex-spy and buddy, Jack [Bruce Campbell] and ex-girlfriend/former IRA demolitions expert, Fiona [Gabrielle Anwar] to help and/or hinder. Topping that, Carla is one of the people who had Michael burned in the first place! 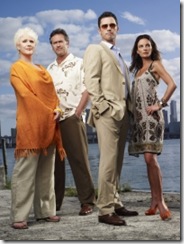 The follow-up ep, Turn and Burn, finds Michael helping a young woman with a stalker problem – by the number two man of the local drug kingpin! Even worse, he gets manipulated into attending a “counselling session” with his mom. [Oh, the humanity!] And these are just the side gigs! His assignment from Carla is to get a computer key card copied – and that requires a special kind of expert…

Burn Notice was probably the best series of last summer, in terms of pure entertainment value. It certainly filled the requirements of the USA “characters wanted” brand – though Michael is the most normal of the characters [it’s his mom and Jack who are the real characters!]. If anything, it seems that the series has gotten smarter, funnier and maybe even a bit edgier this season.

The first two scripts are killer and the ensemble certainly makes the most of that. Each ep is paced just quickly enough to maintain interest without trying to do too much too quickly [a real potential problem here]. Donovan has really done a nice job of keeping the balance between nice and twisted in Michael’s character. He gives the show its calm center in the eye of the hurricane that is his mom, Jack, and Fiona [though Fiona seems to have calmed down a bit from last season – let’s see how long that lasts]. Tricia Helfer nicely underplays Carla’s menace, thereby seeming even more dangerous, and she definitely adds a bit of spice to Michael’s life – which makes it even harder for Michael to find out who she really is – and who she works for.

If you liked Burn Notice last season, you’re going to love it this year. 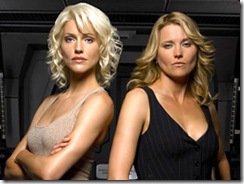 Previously heard only in vaguely threatening phone calls, Helfer will bring the mysterious Carla out of the shadows. The extremely intelligent and incredibly sexy Carla is Michael’s [Jeffrey Donovan] only contact with the shadowy group that got him burned.

According to a USA press release, Carla has “plans for him and various “assignments” for him to take care of, and she’s not taking no for an answer. Michael’s trapped in a deadly game with Carla where the only way he can keep his family safe, and find out more about her, is to play along and look for the opening he needs to take her on.”