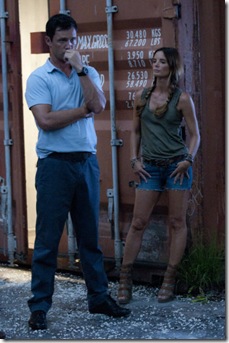 With season four of Burn Notice being released next week – and season five only a couple of weeks away – I thought it would be fun to look back at the fourth season’s best moments [and episodes].

It was an eventful season for burnt spy Michael Westen [Jeffrey Donovan]: he found himself semi-willingly working with the people who burned him – and their slick, politely nasty representative, Vaughn [Robert Wisdom] – to take care of some problems that could have caused the country a great deal of bother. Along the way, he, his friends – ex-IRA demolitions/weapons expert Fiona [Gabrielle Anwar], former Navy SEAL, Sam Axe [Bruce Campbell] and Jesse [Coby Bell], a counterintelligence agent Westen accidentally burned – and, on occasion, his feisty, manipulative mom, Madeline [Sharon Gless – who deserved her Emmy nomination] took on lesser [bit no less dangerous] opponents like: a motorcycle gang, a drug syndicate, a flirty assassin and many more.

Following the jump, my five favorite episodes and fifteen moments/reasons that season four was so much fun. Tomorrow: Fifteen Reasons To enjoy White Collar Season Two.

END_OF_DOCUMENT_TOKEN_TO_BE_REPLACED 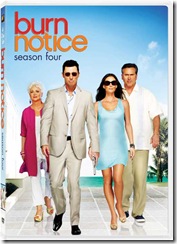 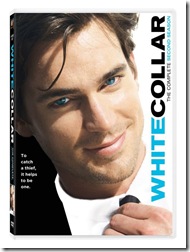 Now, thanks to the aforementioned 20th Century Fox Home Entertainment and EclipseMagazine.com, you can win copies of both DVD sets. For details, follow the jump.

END_OF_DOCUMENT_TOKEN_TO_BE_REPLACED 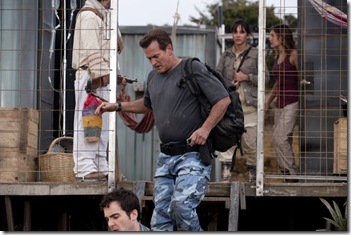 When I heard that there was going to be a movie revealing key events in the past of Burn Notice’s Sam Axe, I was stoked. Bruce Campbell’s Axe is a source of much of the subversive wit and spirit of the hit USA Network series. Burn Notice: The Fall of Sam Axe [Sunday, 9/8C], though mostly enjoyable, is not quite what I was expecting.

END_OF_DOCUMENT_TOKEN_TO_BE_REPLACED

USA Network has released a trailer for Burn Notice: The Fall of Sam Axe. Set before Sam retired from the Navy SEALs, it exploits Bruce Campbell’s unique charm most groovily, indeed. There are explosions, quips and even a bit of snogging – and a particularly sneaky insertion of Campbell’s best nickname. Burn Notice: The Fall of Sam Axe premieres on Sunday, April 17th, at 9/8C. Enjoy. 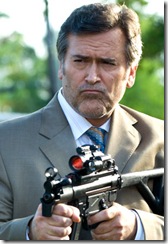 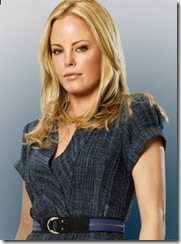 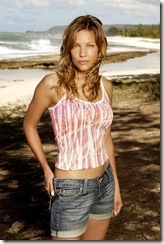 USA Network’s untitled Burn Notice Prequel has added Kiele Sanchez [The Glades] and Chandra West [The Gates] to its cast. The two-hour event movie will delve into Sam Axe’s past – focusing on his last operation as a Navy SEAL. West will play a a sexy, fun woman named Donna whom Sam has begun seeing while Sanchez will play a humanitarian with a food relief effort.

The prequel – written by Burn Notice creator Matt Nix and directed by Burn Notice star Jeffrey Donovan – takes place in 2005, when Sam is deployed to check out the situation when some Colombian rebels make things hot for the military platoon stationed there.

John Diehl [The Shield] has signed on as Rear Admiral Lawrence, Sam’s commanding officer. RonReaco Lee [The Shield] will portray Dr. Ben Delaney, founder of a non-profit clinic in Colombia.

The Burn Notice Prequel is set to air this spring. 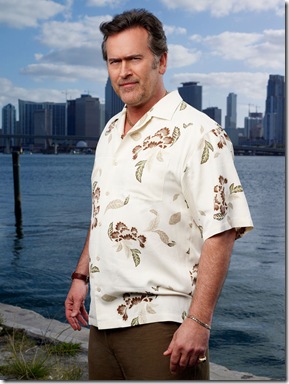 Sam Axe is a handsome, good natured, but deadly when he needs to be, former Navy Seal and Military Intel Operative who works with Michael Westin (series star Jeffrey Donovan) On USA’s Burn Notice. On January 24, 2011, USA began production on a prequel movie follows Sam Axe to Colombia on his last Navy SEAL assignment prior to his retirement.

No air date for the movie is set yet. 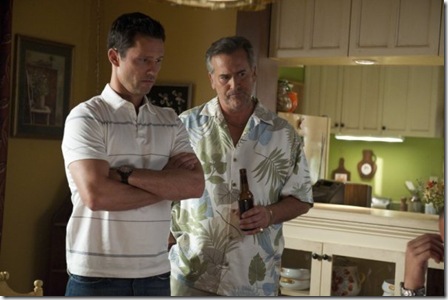 When the Burn Notice Movie begins shooting in January, there will be a familiar face behind the camera as well as in front. Series star Jeffrey Donovan has been tapped to direct the prequel film that stars Bruce Campbell in his role as Sam Axe. Burn Notice creator Matt Nix will provide the script.

Follow the jump for details on the shoot and movie’s plot.

END_OF_DOCUMENT_TOKEN_TO_BE_REPLACED 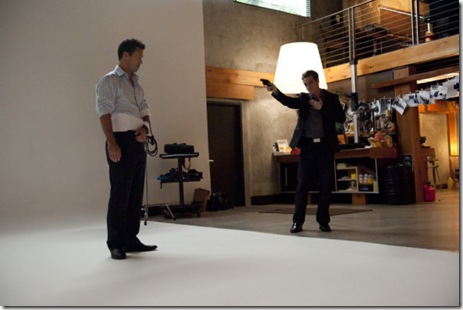 Despite having what is sometimes referred to as a blue sky filter, the USA Network has a number of programs that really stretch that description. Foremost amongst them is Burn Notice [Thursday, 10/9C]. The series returns this week with Eyes Open, an episode that picks up with Michael Westen [Jeffrey Donovan] in far less than his usual top condition – but there’s a missing bible and a coded list of the persons responsible for burning him and, well, he can’t let a little thing like a hole in his clavicle [his words…] keep him from taking care of business. And then there’s this seemingly unrelated explosion…

END_OF_DOCUMENT_TOKEN_TO_BE_REPLACED 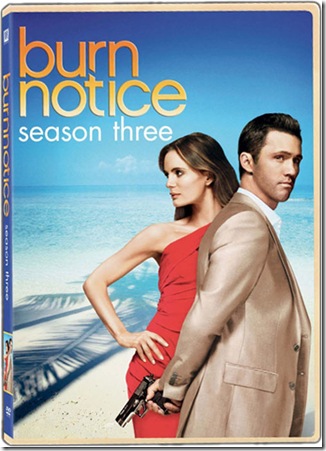 Season two of Burn Notice ended with Michael Westen [Jeffrey Donovan] making a perhaps not so clean break with Management [John Mahoney], head of the clandestine government agency that burned him. This after learning that the very agency that burned him had protected him from his enemies – and seen to it that the police hadn’t interfered while he was helping others.

Friends & Family, the first post-Management protection episode, found Michael being trundled off to jail – once he’d swum back to Miami Beach from his aborted helicopter ride. Not only had Management stopped protecting him, someone made the police and, apparently, foreign agencies aware of him – and his location.

END_OF_DOCUMENT_TOKEN_TO_BE_REPLACED

On June 2, I had the opportunity to take part in a Q&A session with Matt Nix, creator of the USA Network hit, Burn Notice [Thursdays, 9/8C]. He discussed everything from the show’s spycraft to upcoming guest stars and how writing adjusts to casting, among other things.

END_OF_DOCUMENT_TOKEN_TO_BE_REPLACED 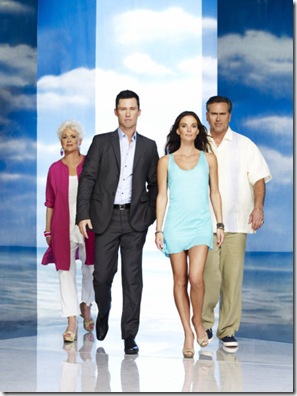 Following the strangest cliffhanger of the series to date, Michael Weston finds himself in a brand new situation in tomorrow’s fourth season premiere of Burn Notice, Friends and Enemies [USA, 9/8C]. That posh library in the middle of a very secure prison leads to a real game changer for everyone’s favorite burnt spy!