A new age is dawning. Meet the tribe in the brand new Early Man trailer! In cinemas 2018 A.D.

Set at the dawn of time, when prehistoric creatures roamed the earth, EARLY MAN tells the story of courageous caveman hero Dug (Eddie Redmayne) and his best friend Hognob as they unite his tribe against a mighty enemy Lord Nooth (Tom Hiddleston) and his Bronze Age City to save their home.

From the man who gave us Wallace and Gromit comes the prehysterical Early Man – the story of plucky caveman Dug (Eddie Redmayne) and his efforts to unite his tribe against the Mighty Bronze Age.

Plus, a saber-toothed rabbit. So there’s that… 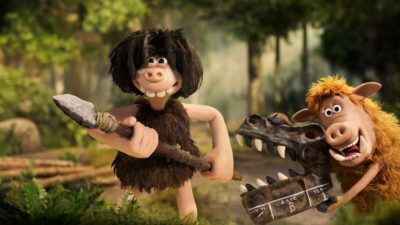 Nick Park, director of the beloved Wallace and Gromit films, has returned to directing after more than a decade to helm Early Man.

Early Man features caveman Dug and his companion Hobknob as they put together a team to battle the mighty Bronze Age in the world’s first soccer match.

Check out the announcement video after the break. Early Man is set for 2018.