BOOM! Studios, DeVito Artworks, and Twentieth Century Consumer Products Announce Kong on the Planet of the Apes – a six-issue series written by Ryan Ferrier, with art by Carlos Magno.

Following the events of the first Planet of the Apes film (1968), Dr. Zaius and General Ursus lead a small group of soldiers to the Forbidden Zone to destroy any remaining evidence of Taylor’s time among them. To their surprise, they discover… a KONG!

Kong on Planet of the Apes #1 will be in comics shops in November.

END_OF_DOCUMENT_TOKEN_TO_BE_REPLACED 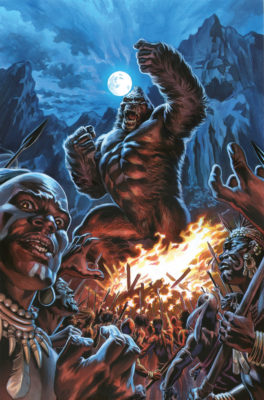 Premiering in July, Kong of Skull Island takes place well before the arrival of Carl Denham and Jack Driscoll and the rest of the crew of the Wanderer. Two fractured and combative civilizations are forced to band together as they venture onto Skull Island, their new home, which they are soon horrified to realize is home to dinosaurs, giant creatures…and Kongs!

Kong of Skull Island will be written by Jack Asmus (All-New Inhumans) and illustrated by Carlos Magno (Planet of the Apes). Follow the jump for details.

END_OF_DOCUMENT_TOKEN_TO_BE_REPLACED