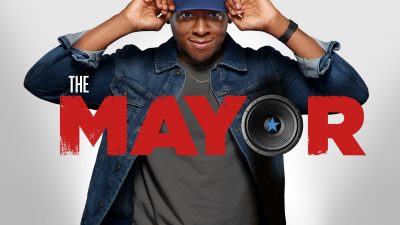 It looks like his campaign for mayor (and winning!) will help Courtney Rose’s (Brandon Michael Hall) CD sales – Sub Pop will be releasing the music from ABC’s first season comedy series, The Mayor.

Songs will be available every Friday, preceding each Tuesday night episode throughout the season.

END_OF_DOCUMENT_TOKEN_TO_BE_REPLACED

The Mayor (ABC, Tuesdays, 9:30/8:30C) is a show about a naïve outsider, a talented but unknown rapper, who runs for public office in order to promote his album – and wins!

His strategy? To say outrageous stuff and call bull$#! when the incumbent lapses into political bafflegab.