With Arachnids in the UK, Doctor Who (BBC America, Sundays, 8/7C) returns to one of the genres it does particularly well – horror. Time to start watching from between your fingers (or from behind your sofa)!

END_OF_DOCUMENT_TOKEN_TO_BE_REPLACED

Doctor Who will have its global premiere on Sunday, October 7th (1:45/12:45C) in a simulcast that will be shown at New York Comic Con 2018 – followed by a panel with star Jodie Whittaker, showrunner Chris Chibnall and executive producer Matt Strevens.

The season premiere, The Woman Who Fell To Earth, will air on BBC America at 8/7C (with bonus interviews with Jodie Whittaker and footage from New York Comic Con),the show’s new regular timeslot.

END_OF_DOCUMENT_TOKEN_TO_BE_REPLACED 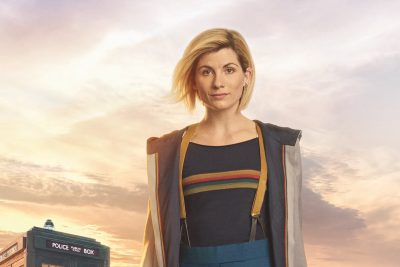 It’s as mysterious as anything we’ve seen about the series, so far – though I suspect that not the Speed Force crackling about them.

Doctor Who returns this fall.