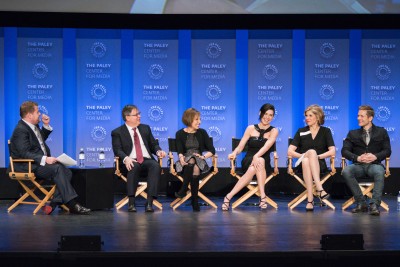 Behind the Story with The Paley Center opens its second season on Sunday, November 8th (SundanceTV, 10am/9C), with a look behind the scenes of The Good Wife.

Other shows to be featured in season two include: Scandal, Marvel’s Agents of S.H.I.E.L.D.,  Girls, Jane the Virgin and Modern Family. Follow the jump for more.

END_OF_DOCUMENT_TOKEN_TO_BE_REPLACED

SundanceTV has just made it possible for fans of a new half-dozen TV series (including The Good Wife, Scandal, Girls Modern Family, Jane the Virgin, Marvel’s Agents of S.H.I.E.L.D.) to go behind the scenes and learn the story behind the stories.

The network has renewed Behind the Story with The Paley Center for a second, six-episode season. Details – including the list talent from each show that will be appearing – follow the jump.