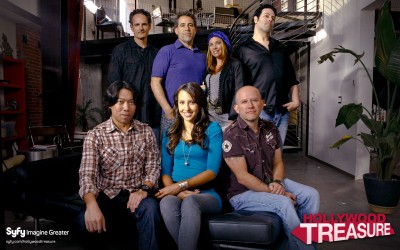 The premiere episode is titled “Let the Bidding Begin” and introduces us to Joe Maddalena and his team.  The montage of Joe traveling the globe in search of these Hollywood treasures and our instant recognition from brief flashes of them will bring us sweet memories of television past.  Of course, not all the items on the hunt pan out to be authentic, and it takes Joe’s sharp eyes and decades of knowledge and experience to differentiate.

The first treasure to be featured is the magic carpet bag from Mary Poppins, which had a rather unique story to how it went from the glory of the screen to someone’s dark basement for decades.  Joe travels to Chicago to rescue the bag and then begins the painstaking process of authentication.  Once the team is sure the item is the real thing, it is ready to be added to the auction list.  Joe estimates the value at $10,000-15,000, but once the bidding starts no one could have guessed the unbelievable winning offer.

Part of Joe’s expertise is knowing who the collectors are, such that when he comes across an item appropriate for them he can alert them and give them a chance to take part in the bidding.  Such as the gentleman focused on anything and everything connected with  Lost in Space,  who is ready and willing to bid $50,000 on a plastic prop gun, and whose dream is to open a museum dedicated to the classic series. There are also individuals who have been fortunate to own a singular historical piece and Joe maintains a good relationship with them in the event they change their mind and are willing to part with their unique item.  The auctions are quite interesting as well.  Not only are there people in the auditorium, but also a couple of hundred phone bidders, and nearly one thousand more on the internet.  That’s a lot of competition for bidding! 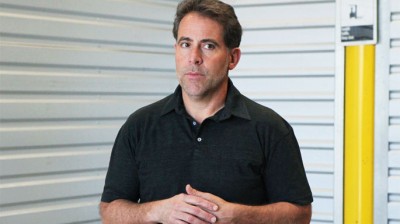 The second episode titled “I’ve Got You, My Pretty” begins with a coat that was possibly Bela Lugosi’s costume in  White Zombie  back in the 1930s, and the meticulous authentication processinvolved.  We are also introduced to the current owner of the hat worn by the Wicked Witch of the West in  The Wizard of Oz, who is still grappling with the decision of whether or not to consign it for auction after a 21-year love affair with the item.  The highlight of the episode is Joe’s meeting with Dawn Wells, better known as Mary Anne from  Gilligan’s Island,  as he surveys her wardrobe and prop collection from the classic series, including an original script signed by all the cast members.  The culmination is once again the fast-paced auction and the unbelievable dollar numbers involved.

Watching these episodes unfold makes the viewer feel the pressure of being in a frenetic race to obtain special objects in time for the day of auction.  As we watch, we will encounter living Hollywood legends and icons of pop culture while hearing the fascinating stories behind the items.  And we will sit in anticipation as collectors bid for a chance to own Hollywood history, ultimately being left slack-jawed as the bidding prices climb higher and higher.  Not only is this series fun, but informative as well.  And at some point as the series  progresses, we will stare wide-eyed at some items such as the original Action Comics that introduced Superman, currently valued between $100,000 to $200,000.  That’s Joe holding it in his hands in the picture below.  Which reminds me… I think I need to go look through my comic book collection in the basement again; who knows what fortune might be lurking there!  Although I might need Joe to tell me the secret behind being able to part with such priceless personal treasures. 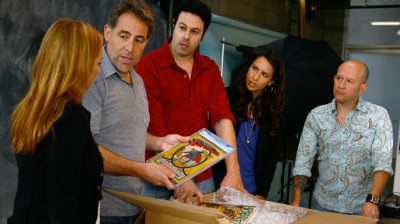 PRESS RELEASE: “Hollywood Treasure” is a weekly documentary-reality series that delves into the intricate world of collecting showbiz and pop culture memorabilia, including science fiction and fantasy props and costumes.  The series follows Joe Maddalena, owner of Profiles in History and the world’s largest auctioneer of original movie, television and pop culture collectibles.  He hunts down the memorabilia items, and auctions them off for top-dollar to pop culture collectors. The series is produced by Shevick*Zupon Entertainment.  Jerry Shevick, Mark Zupon and Bruce Toms are Executive Producers, and Co-Executive Producer is Steve Longo.