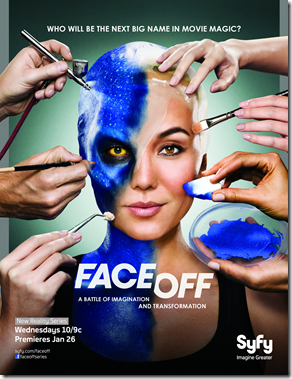 Syfy has developed a habit of balancing out its more expensive scripted series with inexpensive reality shows. Face Off [Wednesdays, 10/9C] is a typical competition series – except that it features a dozen special effects make-up artists vying to win $100,000. The twelve competitors live in adjacent six-person lofts and face various challenges. The judges are well known industry professionals.

The premiere opens with the standard meet-and-greet and introductions, then spins off the norm with a surprise assignment – a foundation make-up challenge using the servers as models and utilizing both provided effects make-up kits and items from within the room. There’s a two-hour time limit and the winner gains immunity for the first major challenge – which takes up the remainder of the episode.

For the first challenge, the contestants are split into teams of two and given the assignment of creating a creature based on one of three exotic animals: a black beetle, an ostrich and an elephant – one of each is brought into the effects shop that they will be using for the rest of the series. They have to match their work to sculptures of models that are also provided. They have three days [or slightly longer than the time it took roger Corman to film the original Little Shop of Horrors] to complete their creatures.

Although Face Off is fascinating because we actually get watch the contestants create the work on which they’ll be judged, the context of their work is still the cliché-ridden format that every reality/competition show follows. Thus, all judgments fall on act outs and all results follow a commercial break following a replay of the last several seconds prior to the break.

The contestants are required to share accommodation to create a kind of bonding that the challenges then, theoretically, proceed to tear apart. Editing creates likable characters and story arcs as much as the actual personalities do, and everything is geared to be as dramatic as possible – there are more sequences involving things falling apart than things going swimmingly, for example.

The one aspect of this reality/competition series that I like – and something that doesn’t seem to be the case on most of these shows – is that there is no designated or emerging nasty judge and no winsome, good guy judge. All three of Face Off’s judges can be lethal when the work is crap – and effusive when it’s good. Hetrick tries to glower before voicing praise, but he’s not that good at faking out the audience [of course, the case might be different for the person whose work he’s judging, but as a viewer, I didn’t find him that convincing…].

Westmore is pretty, poised and intelligent. With her family’s background [her great-grandfather was also in the make-up effects industry, so it’s kind of the family business] she is probably completely competent to be a judge, herself.

Face Off is a slick, intriguing variation on the standard reality/competition format that works more because of the actual effects make-up work being done by the contestants. Watching the work being done is fascinating; the forced dramatics aren’t, especially.

If you watch the behind-the-scenes features on your DVDs/Blu-rays, then you will probably enjoy Face off.

One thought on “Syfy’s Face Off Brings Reality/Competition Clichés To Special Effects Make-Up!”