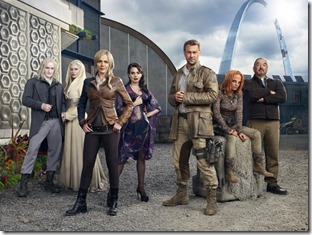 Play the game. Join the show.

Syfy  and Trion Worlds have come with a unique and original idea to further connect the game and TV series worlds of Defiance: if you play the game, you might win your character a role on the show!

In the in-game contest, players are pit against the game’s Arkfall events to see who can become the ultimate Ark Hunter. The winner’s character will appear during season two of Defiance. For more details follow the jump to Syfy’s press release.

New York, NY and Redwood Shores, CA – July 8, 2013 – Syfy and Trion Worlds today announced a new contest that brings a gamer into the television world of Defiance, the groundbreaking online open world shooter and hit television series on Syfy. The “Play the Game. Join the Show.” in-game contest pits players against the game’s Arkfall events to see who can rise to the top and become the ultimate Ark Hunter. The winner’s character will appear during the second season of the TV series.
The ten Ark Hunters who complete the most Major Arkfall events between July 8 (10am PDT) and July 30(10am PDT) will compete for a chance to have their character written onto the show. These ten semifinalists will be fleshed out with backstories written by the show’s writing staff, which will then be featured on Facebook, where Defiance fans will choose their five favorites. From this pool of five finalists, a member of the Defiance team will select the final winner to appear in season two of Defiance.

The “Play the Game. Join the Show.” contest marks the second time that players have been invited to make their mark on the world of Defiance. Earlier in the year, Trion Worlds and Syfy ran the “Most Wanted” contest, which saw gamers competing to have their likeness included on wanted posters on an episode of the TV show.
To enter, players must register for the “Play the Game. Join the Show.” contest at www.defiance.com/en/game-show-contest , then complete as many Major Arkfalls as possible between July 8 (10am PDT) and July 30 (10am PDT). Between August 12th and August 21st, one semifinalist backstory will be posted per day. Registered Facebook users can vote for the top five characters between August 26th (3am PDT) and September 6th (8:59pm PDT), and the final winner will be selected in September. Defiance season two premieres in 2014 on Syfy.

About Syfy
Syfy is a media destination for imagination-based entertainment. With year round acclaimed original series, events, blockbuster movies, classic science fiction and fantasy programming, a dynamic Web site (www.Syfy.com (http://www.syfy.com/)), and a portfolio of adjacent business (Syfy Ventures), Syfy is a passport to limitless possibilities. Originally launched in 1992 as SCI FI Channel, and currently in more than 98 million homes, Syfy is a network of NBCUniversal, one of the world’s leading media and entertainment companies.  NBCUniversal is owned by Comcast Corporation. (Syfy. Imagine greater.)

About Trion Worlds
Trion Worlds is the leading publisher and developer of premium games for the connected era.  Powered by a breakthrough development and publishing platform, Trion is revolutionizing the way games are developed, played and sold. Trion’s world-class team delivers high-quality, dynamic and massively social games operated as live services across the biggest game genres and devices; including the critically acclaimed blockbuster, Rift® and the highly-anticipated ArcheAge, End of Nations®, and Defiance™. Trion is headquartered in Redwood City, Calif., with offices in San Diego, Calif., Austin, Texas, and at Trion Worlds Europe in London, UK.