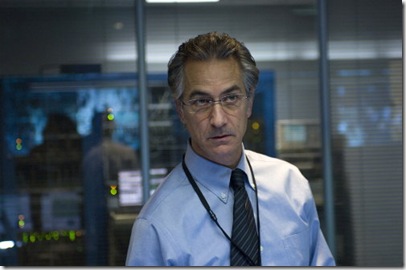 Syfy has gone above and beyond for its upcoming 90-minute paranormal action-adventure pilot, Alphas, by enlisting the talents of David Strathairn. The multiple-award nominee [Oscar®, Golden Globe, Screen Actors’ Guild] for his role as Edward R. Murrow in the film Good Night, and Good Luck, will play “the unconventional, eccentric Alphas team leader Dr. Leigh Rosen. Though he comes across as somewhat of an absent-minded professor at times, he is also a cunning and manipulative power-player willing to bend the rules in pursuit of his objectives and in support of his team.”

Alphas, from writers Zack Penn and Michael Karnow – and directed by Lost’s Jack Bender, follows a team of ordinary citizens who possess extraordinary and unusual mental skills.  Using physical feats and uniquely advanced mental abilities, this unlikely team takes the law into their own hands and uncovers what the CIA, FBI and Pentagon have not been able or willing to solve.  These gifted individuals must balance their quirky personalities and disparate backgrounds with their not always visible powers as they work to solve crimes, stop the ticking time bomb and catch the enemy.

Strathairn has a remarkable range and is considered one of the finest actors of his generation, with the ability to slip into any role convincingly. Some of his notable film roles include the title character in Harrison’s Flowers (2000); the wisecracking blind techie in Sneakers (1992); Joe St. George in Dolores Claiborne (1995); Theseus, Duke of Athens, in the 1999 version of A Midsummer Night’s Dream; and corrupt baseball player Eddie Cicotte in Eight Men Out (1988).

He has worked frequently with his Williams College classmate and director John Sayles, beginning with his film debut in Return of the Secaucus 7, and including the films Passion Fish, Matewan, Limbo and City of Hope, for which Strathairn won the Independent Spirit Award. Alongside Sayles, he played one of the Men in Black in the 1983 film The Brother from Another Planet.

Other notable television and film roles include The Days and Nights of Molly Dodd; The Miracle Worker; Paradise, The Sopranos, and Miami Vice.

Among Strathairn’s recent films are: We Are…Marshall, Hereafter, Steel Toes, The Bourne Ultimatum, The Spiderwick Chronicles, The Trials of J. Robert Oppenheimer, and No God, No Master. In 2009, Strathairn performed in The People Speak a documentary feature film that uses dramatic and musical performances of the letters, diaries, and speeches of everyday Americans, based on historian Howard Zinn‘s "A People’s History of the United States”.