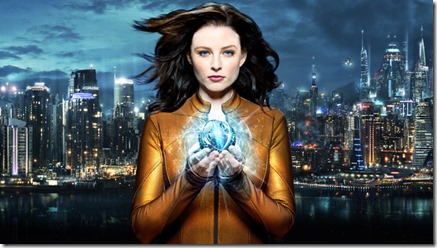 Two new sci fi and fantasy series – Primeval: New World and Sinbad – along with season two of Continuum (pictured) comprise Syfy’s primary scripted entertainment for summer 2013. Eight unscripted series, including the returning Face Off and Ghost Hunters – along with new series Exit, Cosworld and Joe Rogan Questions Everything – will play to fans of reality TV.

SYFY LAUNCHES A SUMMER OF IMAGINATION AND ADVENTURE

As part of its annual July 4th tradition, Syfy will air a Twilight Zone marathon as well as setting off fireworks with the Original Movie Independence Day-saster.

Syfy will kick off Summer 2013 with a Memorial Day (May 27) Roger Corman movie marathon highlighted by Piranhaconda and Sharktopus.

Returns Tuesday, June 4 at 9PM – Hosted by Jaleel White (Family Matters), the half hour, extreme game show Total Blackout returns with “Parental Blackout” – a special parent-child episode where three mother-daughter teams and one mother-son team square off to conquer challenges in pitch black.  After contestants guess the weight of several objects, they must then reach in and identify whatever lurks in the mystery tanks. The remaining teams then attempt to identify a range of innocent – and not so innocent – objects placed inside bubble helmets for a chance to win $5,000! The international hit series is produced by FremantleMedia North America (American Idol, The X Factor) and was created by Henrik Nielsen (Can You Duet?, Danish versions of The X Factor, Got Talent and Pop Idol).  Nielsen and Scott St. John (Deal or No Deal, America’s Got Talent, The Choice) are executive producers.

Premieres Tuesday, June 4 at 10PM – Based on the Nippon Television Network’s hit Japanese series Dero!, Exit is an all-new six episode series hosted by Curt Doussett (America’s Lost Treasures, Hazard Pay). In each nail-biting episode, four teams of two contestants will battle to escape a series of mind-bendingly diabolical rooms, each more challenging than the last. The team that manages to find their way out will win the $10,000 prize. Exit is produced by Smart Dog Media in association with Zig Zag Productions.  Craig Plestis (Minute to Win It, America’s Got Talent), Michael Binkow (1 vs. 100, Who Wants to Be A Millionaire), Danny Fenton (Scam City, Cheryl Cole: Where Did It All Go Right… and Wrong) and Scott St. John (Total Blackout, America’s Got Talent) serve as executive producers.

Returns Friday, June 7 at 10PM — Moving into its new Friday 10PM time period, the 13 all-new episodes of Season 2 picks up following the gripping Season 1 finale when Kiera Cameron (Rachel Nichols/Criminal Minds, Alias) fought a ticking clock to prevent a cataclysmic act of terrorism. Cameron is a cop from the future who finds herself trapped in the present day, swept along when a group of fanatical terrorists escaped their planned execution in 2077 by vaulting back in time. Continuum co-stars Victor Webster (Castle, Melrose Place) as detective Carlos Fonnegra and Erik Knudsen (Jericho, Scream 4), who plays teen tech genius Alec Sadler.

Executive producers of Continuum are series creator Simon Barry (The Art of War), Pat Williams (Smallville) and Tom Rowe (Tin Man). Continuum is a Showcase original series and is produced by Reunion Pictures in association with Shaw Media.

Premieres Saturday, June 8 at 9PM – The 12-episode Sinbad follows the epic sea journey of the flawed hero Sinbad, played by newcomer Elliot Knight, who embarks on a quest to rid himself of a curse and embrace his destiny, as he is forced to flee from his home town of Basra. On board The Providence, an intriguing band of travelers is thrown together, including taciturn Norwegian sailor Gunnar (Elliot Cowan/Marchlands), agile jewel-thief Rina (Marama Corlett/The Devil’s Double), and haughty and aristocratic Nala (Estella Daniels/Thorne). Completing the ship’s complement is the odd-ball cook (Junix Inocian/The 51st State) and the cerebral doctor Anwar (Dimitri Leonidas/Grange Hill). Sinbad is a British Sky Broadcasting presentation of An Impossible Pictures Production. Producer is Grainne Marmion.  Executive producers are Tim Haines, Sophie Gardiner and Andrew Woodhead. The series is distributed by BBC Worldwide.

Premieres Wednesday, June 12 at 9PM – Amy Bruni’s back! Ghost Hunters kicks off five  brand new episodes with the return of its old friend “Red,” as TAPS (The Atlantic Paranormal Society) founder Jason Hawes fondly calls her. Amy joins the team for her first investigation since going on maternity leave last year. In the summer premiere, TAPS is invited to Louisiana’s Shreveport Auditorium to investigate claims of paranormal activity at the famed venue where Elvis Presley played his first professional gig. Did the King of Rock ‘n Roll really leave the building or will TAPS find evidence that Elvis’ spirit is still performing for an audience of apparitions? Ghost Hunters is produced for Syfy by Craig Piligian’s Pilgrim Studios (Dirty Jobs, The Ultimate Fighter, Top Shot). Piligian and Thomas Thayer, along with Mike Nichols and Alan David, serve as executive producers.

Premieres Thursday, July 4 at 9PM — An alien invasion cripples America’s conventional defense forces.  When the President’s helicopter is shot down, his brother (a small-town hero) and a renegade scientist must find the aliens’ weakness and defeat them. The movie stars Ryan Merriman (Final Destination 3), Tom Everett Scott (Southland), Emily Holmes (Snakes on a Plane) and Andrea Brooks (Supernatural).

Premieres Tuesday, July 16 at 9PM – Life-long unexplained paranormal mystery-addict Joe Rogan ventures into unknown worlds and untapped territories to search for answers to life’s most startling theories. Having explored these questions for years on his podcast, Joe now takes his journey to the next level, traveling the country and knocking on any door necessary to find the truth. In his own unique and inquisitive style, Joe will stop at nothing to quench his curiosity for the unknown. Production company: A. Smith & Co. Executive producers: Arthur Smith, Joe Rogan, Kent Weed, Frank Sinton, Michael Braverman, Tod Mesirow, Barry Bloom, Jeff Sussman and Chandra Keyes.

Premieres Tuesday, July 16 at 10PM — Produced by Pilgrim Studios – the company behind Syfy’s Ghost Hunters, the most successful paranormal franchise on cable – Notorious Hauntings features a globetrotting group of researchers who investigate reports of extreme and dangerous supernatural activity around the world.  In each of the six self-contained episodes, viewers will follow the investigators as they research the otherworldly activity at each site and explore the gruesome history of the infamous and heinous individuals. The team will stop at nothing as they dig deep into their crimes and victims to determine if they are the cause of the present-day haunting. Through the gathering of evidence and the uncovering of little-known history, Notorious Hauntings will explore some of the world’s most enduring mysteries, including the case of Jack the Ripper in London, Dracula-inspiration Vlad the Impaler in Romania and the bloodthirsty Borgias in Italy. Notorious Hauntings is produced by Pilgrim Studios with Craig Piligian and Mike Nichols serving as executive producers.

Premieres Tuesday, August 27 at 10PM — Cosworld is a tantalizing six-episode docuseries that lifts the veil on the imaginative world of cosplay competition. The series follows some of the hottest cosplay stars as they make a splash at comic book conventions around the country. The show dives deep into their lives, following their process as they create extravagant and visually arresting costumes each week. These individuals will constantly defy odds and race against the clock to transform themselves into amazing fictional characters that push the boundaries between fantasy and reality, all in hopes of impressing the convention judges to win a cash prize and the chance to become a cosplay legend. Production company: 51 Minds, an Endemol Company. Executive producers: Mark Cronin, Courtland Cox and Dave Caplan.


Syfy is a media destination for imagination-based entertainment. With year round acclaimed original series, events, blockbuster movies, classic science fiction and fantasy programming, a dynamic Web site (www.Syfy.com), and a portfolio of adjacent business (Syfy Ventures), Syfy is a passport to limitless possibilities. Originally launched in 1992 as SCI FI Channel, and currently in more than 98 million homes, Syfy is a network of NBCUniversal, one of the world’s leading media and entertainment companies.  NBCUniversal is owned by Comcast Corporation.(Syfy. Imagine greater.)