PLUS NEW SEASONS OF DEFIANCE AND FACE OFF

NEW YORK – May 28, 2014 – Syfy’s hot Summer 2014 original programming lineup will be led by the series premiere of Dominion (June 19); the second season return of the critically acclaimed Defiance (June 19); the Season 7 return of Face Off (July 22) and the debut of the competition series Wizard Wars (August 19). 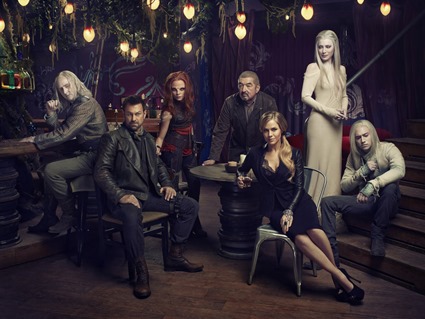 Returns Thursday, June 19 at 8PM – As the story of Defiance resumes, the lives of the townspeople are in drastic turmoil. The Earth Republic has assumed control of the town, with far-reaching consequences including a new mayor. Nolan traverses the badlands to find a lost Irisa, Amanda has an unexpected new role in the town as she searches for Kenya and the Tarr family desperately tries to keep control of their criminal empire in the midst of dramatic changes. Grant Bowler returns as Nolan, along with Julie Benz as Amanda Rosewater, Stephanie Leonidas as Irisa, Tony Curran as Datak Tarr, Jaime Murray as Stahma Tarr, Graham Greene as Rafe McCawley and Jesse Rath as Alak Tarr.  The cast also features Dewshane Williams as Tommy, Trenna Keating as Doc Yewll, Justin Rain as Quentin McCawley and Nicole Munoz as Christie McCawley.

James Murray joins the cast in the integral role of Mayor Pottinger, the new mayor of Defiance. William Atherton also joins the cast to portray high-ranking Earth Republic official Viceroy Mercado, and Anna Hopkins will play the role of Earth Republic soldier and documentarian Jessica “Berlin” Rainier. Linda Hamilton will play the key recurring role of Pilar McCawley, the wife of Rafe McCawley (Greene) and mother to their three children. 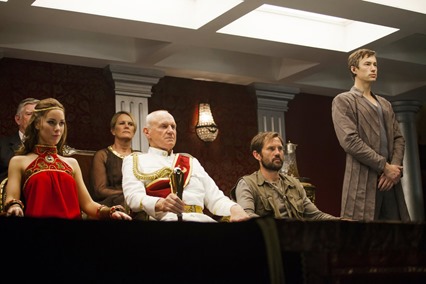 Premieres Thursday, June 19 at 9PM – Based on characters from the hit theatrical film Legion (2010), Dominion is an epic supernatural drama set in the year 25 A.E. In this transformed post–apocalyptic future, an army of lower angels, assembled by the archangel Gabriel, has waged a war of possession against mankind. The archangel Michael, turning against his own kind, has chosen to side with humanity against Gabriel. Rising out of the ashes of the 25 year-long battle are newly fortified cities which protect the human survivors. In Vega (formerly Las Vegas), the largest of these cities, two houses vie for control and the stage is set for political upheaval and a dangerous power shift. Meanwhile, a rebellious young soldier begins a perilous journey as the war between the human race and the fallen angels hell-bent on their domination escalates. Dominion stars Christopher Egan (Kings), Tom Wisdom (300), Roxanne McKee (Game of Thrones), Alan Dale (Lost), Anthony Stewart Head (Buffy the Vampire Slayer) and Luke Allen-Gale (The Borgias). 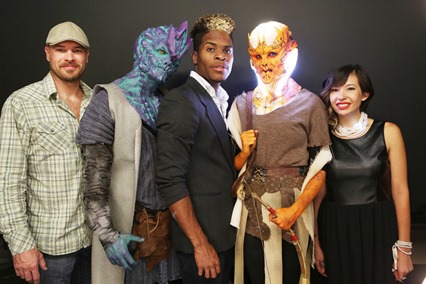 Premieres Tuesday, July 22 at 9PM – The critically-acclaimed series Face Off returns for a high-stakes 7th season themed “Life and Death.” Each week the contestants will face creative challenges designed to inspire them to explore life, death, rebirth and mortality. Season 7 will also introduce new judge, Lois Burwell, a renowned Academy-Award winning makeup artist known for her work on Lincoln, Braveheart, Saving Private Ryan, War Horse and War of the Worlds. Face Off is a competition/elimination series exploring the world of special-effects make-up artists and the unlimited imagination that allows them to create amazing works of living art. As a member of the multi-generational family dynasty whose name is synonymous with the make-up effects field, actress McKenzie Westmore brings expertise to her role as host of the series. Some of SFX world’s most celebrated figures judge the competition – multiple Academy-Award winner Ve Neill (The Hunger Games, Pirates of the Caribbean), industry veteran Glenn Hetrick (CSI: New York, Heroes, Legion), and creature designer Neville Page (Avatar, Prometheus). World-renowned Hollywood makeup artist Michael Westmore (Star Trek) serves as the contestant mentor.

Face Off is a production of Mission Control Media with Dwight D. Smith, Michael Agbabian and Derek Atherton serving as executive producers.

Premieres Sunday, July 20 at 9PM – July 20, 2014 marks the 45th anniversary of humanity’s first landing on the Moon. This two-hour documentary special goes beyond the “official” story to examine what really might’ve happened on that historic day.  What did the astronauts encounter on the lunar surface?  And what doesn’t the world’s governments want us to know?

Syfy is a media destination for imagination-based entertainment. With year round acclaimed original series, events, blockbuster movies, classic science fiction and fantasy programming, a dynamic Web site (www.Syfy.com), and a portfolio of adjacent business (Syfy Ventures), Syfy is a passport to limitless possibilities. Originally launched in 1992 as SCI FI Channel, and currently in 96 million homes, Syfy is a network of NBCUniversal, one of the world’s leading media and entertainment companies. NBCUniversal is a subsidiary of Comcast Corporation.(Syfy. Imagine Greater.)