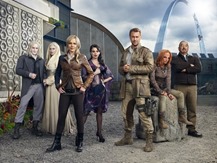 This summer, Syfy expands its schedule of original programming to Thursdays with the premieres of Defiance and Dominion. Season two of Defiance will take the 8/7C slot, while new series Dominion will follow at 9/8C. Both shows will premiere on Thursday, June 19th.

For more series details, check out the press release after the jump.

NEW YORK – March 28, 2014 – This June, Syfy furthers its commitment to premium scripted programming by dedicating an all-new night to original dramas. Beginning June 19, Syfy will kick off its new Thursday night block with the one-two punch of the season two premiere of Defiance, followed by the series premiere of Syfy’s newest scripted series, Dominion.

As the story of Defiance resumes, the lives of the townspeople are in drastic turmoil. The Earth Republic has assumed control of the town, with far-reaching consequences including a new mayor. Nolan (Grant Bowler) traverses the badlands to find a lost Irisa (Stephanie Leonidas), Amanda (Julie Benz) has an unexpected new role in the town as she searches for Kenya and the Tarr family desperately tries to keep control of their criminal empire in the midst of dramatic changes. Joining the cast this season are James Murray as new mayor Niles Pottinger, Anna Hopkins as Earth Republic soldier Jessica “Berlin” Rai and William Atherton as Earth Republic official Viceroy Mercado.

Immediately following the return of Defiance, Syfy will air the 90-minute series premiere of Dominion at 9PM ET/PT.

Based on characters from the hit theatrical film Legion (2010), Dominion is an epic supernatural action drama set 25 years after the events of the movie and picking up in the aftermath of a catastrophic war between an army of angels and mankind that has transformed the world. The series follows the perilous journey of a rebellious young soldier, set against a backdrop of the ultimate celestial battle as it touches down on earth.

Based on characters from the hit theatrical film Legion (2010), Dominion is an epic supernatural drama set in the year 25 A.E. In this transformed post–apocalyptic future an army of lower angels, assembled by the archangel Gabriel, has waged a war of possession against mankind. The archangel Michael, turning against his own kind, has chosen to side with humanity against Gabriel. Rising out of the ashes of the 25 year-long battle are newly fortified cities which protect the human survivors. In Vega (formerly Las Vegas), the largest of these cities, two houses vie for control and the stage is set for political upheaval and a dangerous power shift. Meanwhile, a rebellious young soldier begins a perilous journey as the war between the human race and the fallen angels hell-bent on their domination escalates.

Dominion, produced by Universal Cable Productions and Bold Films, is in production in Cape Town, South Africa. The series is executive produced by Vaun Wilmott, Todd Slavkin & Darren Swimmer, along with Executive Producers Scott Stewart, who co-wrote and directed the feature film Legion, Michael Litvak and David Lancaster of Bold Films who produced the original film.

Bold also produced and financed WHIPLASH, which won the U.S. Grand Jury and Audience Awards at the 2014 Sundance Film Festival. The film, from emerging writer-director Damien Chazelle, stars Miles Teller, J.K. Simmons, Paul Reiser and Melissa Benoist. Bold produced the film alongside Blumhouse Productions and Right of Way Films. Sony Pictures Classics is the domestic distributor of the film, which will be released this year.

Bold recently wrapped production on NIGHTCRAWLER starring Jake Gyllenhaal, Rene Russo and Bill Paxton. Dan Gilroy wrote the script and is directing the film produced by Jennifer Fox, Tony Gilroy, and Gyllenhaal, along with Bold. They are also financing and producing THE COUP, starring Owen Wilson, Pierce Brosnan and Lake Bell. The action thriller was written by John Erick Dowdle and Drew Dowdle and is being directed by John Erick Dowdle. Drew Dowdle is also producing.

In television, Bold Television is producing THE BLACK BOX, a 13-episode drama scheduled to air on the ABC Television Network. The company is also producing the drama DOMINION for Syfy along with Universal Cable Productions.

Syfy is a media destination for imagination-based entertainment. With year round acclaimed original series, events, blockbuster movies, classic science fiction and fantasy programming, a dynamic Web site (www.Syfy.com), and a portfolio of adjacent business (Syfy Ventures), Syfy is a passport to limitless possibilities. Originally launched in 1992 as SCI FI Channel, and currently in more than 98 million homes, Syfy is a network of NBCUniversal, one of the world’s leading media and entertainment companies. NBCUniversal is a subsidiary of Comcast Corporation.(Syfy. Imagine greater.)

Photos by Joe Pugliese and Ilze Kitshoff/Courtesy of Syfy