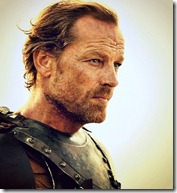 SGU’s Brian J. Smith signs on to guest star on Syfy’s ambitious series, Defiance; Have does its first Halloween episode – guest starring Game of Thrones’ Iain Glen; Polly Walker is a recurring nightmare for the team at Warehouse 13 and Viral video showdown pits some of the masters of the viral video against each on Syfy’s new competition series.

Brian J. Smith (Stargate Universe) is set to guest star in an episode of Syfy’s groundbreaking series, Defiance, set to premiere April 2013. Smith will portray Gordon McClintock, a NASA hero from the pre-Arkfall days who was presumed dead following a space station catastrophe in 2013. The astronaut is discovered to still be alive when he is revived from an induced sleep, and is overcome with shock and disbelief at the dangerous new world of Defiance.

Haven joins the frightful holiday spirit with a ghoulish Halloween program on Friday, October 26 at 10PM (ET/PT), directed by Jason Priestley (Call Me Fitz, Beverly Hills 90210). In the episode, Audrey (Emily Rose), Nathan (Lucas Bryant) and Duke (Eric Balfour) are trapped in Haven’s most infamous haunted house while investigating a mysterious murder. Secrets are revealed when their captor begins pitting them against each other. Iain Glen (Game of Thrones, Downton Abbey) also guest stars as Roland Holloway, a troubled man bent on vengeance against one of Haven’s own.

Polly Walker (Caprica, John Carter) will guest star on Syfy’s hit series Warehouse 13 as Charlotte Dupres, a nemesis of the Warehouse Team who compounds mystery with intrigue and whose innumerable layers and secrets will unfold over the course of Season 4.5. Walker’s story arc will encompass five episodes.

On Viral Video Showdown, Syfy’s innovative new eight-episode competition series, the greatest viral video creators on the planet will go head-to-head in an epic battle for bragging rights and a cash prize. The series premieres, Tuesday, October 30 at 10:30PM/9:30C, with Real Life Movie Trailer, in which Final Cut King, a team of three college students known for their special effects wizardry, take on Half Day Today, a group of 16 television professionals who pride themselves on strong storytelling and comedy. With the challenge of creating a fake movie trailer, both teams race ahead with only four days and a limited budget to create a unique internet video. Only one team will be crowned victorious by the panel of judges and awarded the $5,000 cash prize.

In each episode of Viral Video Showdown, hosted by Kevin Pereira (Attack of the Show), two teams will dig deep into their bag of viral tricks to create a video that best captures that week’s theme and impresses the expert panel of viral video judges: Adam Sessler (G4’s X-Play), YouTube star Brittani Taylor who has amassed over 160 million video views, and Sandeep Parikh (The Guild). Guest judges will include Andy Milonakis (The Andy Milonakis Show), YouTube lip-syncing sensation Keenan Cahill and ‘Obama Girl’ Amber Lee Ettinger.

Future episode themes include turning a cliché into a 90-second story in the style of an action film, the retelling of a fairy tale with a modern twist, the creation of a brand new sport or game and the promo to go along with it, and a musical how-to video.