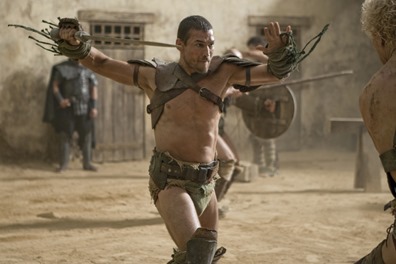 Syfy has acquired the U.S. basic cable rights to all thirty-nine episodes of Starz Entertainment’s Spartacus. The series will premiere on Syfy on Thursday, June 26th (10/9C) – following the second season premiere of Defiance (8/7C) and series premiere of Dominion (9/8C) – and it will be interesting to see how the very R-rated series will edited for basic cable.

NEW YORK – May 22, 2014 – Continuing to expand its roster of diverse domestic and international programming, Syfy today announced it is acquiring U.S. basic cable rights to all 39 episodes (three seasons and the six-part prequel) of the popular swords and sandal series Spartacus from Starz Worldwide Distribution, the global television licensing and content syndication arm of Starz (NASDAQ: STRZA,STRZB).

Spartacus will make its basic cable premiere on Thursday, June 26 at 10PM (ET/PT), rounding out the channel’s potent primetime lineup of original series Defiance at 8PM and Dominion at 9PM.

Said Chris Regina, Senior Vice President, Programming, Syfy: “Our strategy of acquiring hit shows to complement our premium original scripted series has really resonated with our audience. With its action-soaked storylines and powerful characters, Spartacus will be a dynamic addition to our schedule.”

“Spartacus made an indelible impact on STARZ premium viewers in the United States and with audiences around the globe,” said Gene George, Executive Vice President, Worldwide Distribution for Starz. “We are very pleased to strike this accord and bring the incredible tale of Spartacus to Syfy for its viewers.”

About Spartacus
Spartacus was inspired by the actual slave of the Roman Republic who, in 73 BC, led a slave revolt that grew to more than 120,000 fighters. Defying the Roman Republic’s legions of soldiers, they campaigned for two years through much of what is now Italy before succumbing to a much larger army. The new series told a new set of stories rich in character, action, sex and combat centered on the title character. As punishment for defying a Roman Legate, Spartacus was sentenced to die in the gladiator arena. But after surviving numerous fights, his sentence was commuted and sold as a slave to be trained as a gladiator. Spartacus was executive produced by Rob Tapert (The Grudge, Xena: Warrior Princess and Hercules: The Legendary Journeys), Steven S. DeKnight (Buffy the Vampire Slayer), Sam Raimi (Spider-Man and The Evil Dead), and Joshua Donen (The Quick and the Dead).  The lead and title character was originally played by the beloved late Andy Whitfield. Following Whitfield’s departure from the series in 2010, Liam McIntyre was recast as the title character.
Additional cast members included: Lucy Lawless (Xenia: Warrior Princess) as Lucretia, who along with her husband Batiatus (John Hannah), owned the slave Spartacus and the original gladiator camp; Erin Cummings (Dollhouse) as Sura, Spartacus’ wife; Peter Mensah (300, Avatar) as Doctore;  Manu Bennett (30 Days of Night, The Condemned) as Crixus; Craig Parker (The Lord of the Rings trilogy, Legend of the Seeker) as Glaber, Ilithyia (Accidents Happen), played by Viva Bianca; Nick E. Tarabay (Crash, The Sopranos) as Ashur,  Dustin Clare (Underbelly, Satisfaction) as Gannicus;  and Todd Lasance as Gaius Julius Caesar.

About Syfy
Syfy is a media destination for imagination-based entertainment. With year round acclaimed original series, events, blockbuster movies, classic science fiction and fantasy programming, a dynamic Web site (www.Syfy.com), and a portfolio of adjacent business (Syfy Ventures), Syfy is a passport to limitless possibilities. Originally launched in 1992 as SCI FI Channel, and currently in 96 million homes, Syfy is a network of NBCUniversal, one of the world’s leading media and entertainment companies. NBCUniversal is a subsidiary of Comcast Corporation.(Syfy. Imagine Greater.)