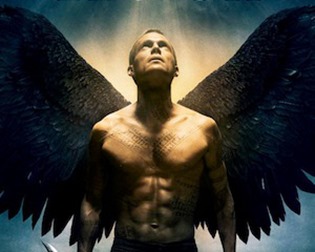 Syfy has ordered to series the supernatural action drama Dominion – set in a post-apocalyptic world where humanity, led by the archangel Michael, battles angels for survival. The series, which follows the events of the theatrical film Legion, will be shot in South Africa and is planned for a 2014 premiere.

SYFY GREENLIGHTS DOMINION TO SERIES FOR 2014

NEW YORK – December 4, 2013 – The ultimate celestial battle between good and evil will descend to Earth in 2014 as Syfy officially greenlights the scripted drama Dominion (working title) to series, it was announced today by Syfy President, Dave Howe. The series is produced by Universal Cable Productions and BOLD Films, and filmed in Cape Town, South Africa.

“Following the critical success of ‘Defiance’ and the upcoming Ron Moore thriller ‘Helix,’ ‘Dominion’ will be the next major addition to Syfy’s growing slate of high quality scripted series,” said Howe in making the announcement. ”‘Dominion’ will continue Syfy’s new strategy to commission stand-out genre series that deliver the high stakes, sci-fi/fantasy experience our audience demands and embraces.”

Based on characters from the hit theatrical film Legion (2010), Dominion is an epic supernatural drama set in the year 25 A.E. In this transformed post–apocalyptic future an army of lower angels, assembled by the archangel Gabriel, has waged a war of possession against mankind. The archangel Michael, turning against his own kind, has chosen to side with humanity against Gabriel. Rising out of the ashes of the 25 year-long battle are newly fortified cities which protect the human survivors. In Vega (formerly Las Vegas), the largest of these cities, two houses vie for control and the stage is set for political upheaval and a dangerous power shift. Meanwhile, a rebellious young soldier begins a perilous journey as the war between the human race and the fallen angels hell-bent on their domination escalates.

Bold Films is an independent production and film finance company dedicated to providing an artistic haven for filmmakers. The company recently wrapped its third production with Academy Award®-nominated actor Ryan Gosling on HOW TO CATCH A MONSTER.  The film, which marks Gosling’s debut as writer and director, stars Christina Hendricks, Saoirse Ronan, Ben Mendelsohn and Eva Mendes.

In October, the company started production on NIGHTCRAWLER, starring Jake Gyllenhaal, Rene Russo and Bill Paxton. Dan Gilroy wrote the script and is directing the film produced by Jennifer Fox, Tony Gilroy, and Gyllenhaal, along with Bold. Bold is also producing and financing WHIPLASH, the next feature from emerging writer-director Damien Chazelle starring Miles Teller, J.K. Simmons, Paul Reiser and Melissa Benoist.  Bold produced the film alongside Blumhouse Productions and Right of Way Films. They are also financing and producing THE COUP, starring Owen Wilson, Pierce Brosnan and Lake Bell.  The action thriller was written by John Erick Dowdle and Drew Dowdle and is being directed by John Erick Dowdle. Drew Dowdle is also producing.

In television, Bold is producing THE BLACK BOX, a 13-episode drama scheduled to air on the ABC Television Network. The company is also producing the drama DOMINION for Syfy along with Universal Cable Productions.