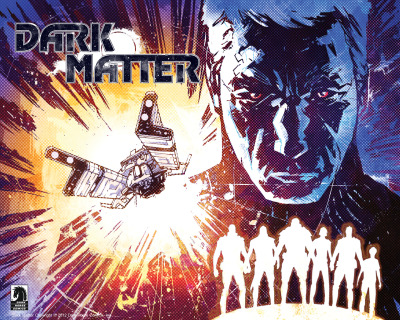 The series begins production in Toronto on January 7.

Created by Joseph Mallozzi and Paul Mullie (executive producers and writers of the Stargate franchise), and developed with Prodigy Pictures (Lost Girl, XIII), the 13 one-hour episodes are based on the graphic novel Dark Matter by Mallozzi and Mullie, published by Dark Horse Comics.

Dark Matter will premiere on Syfy in Summer 2015, joining Syfy’s stable of acquired international and domestic co-productions ranging from the hit series Z Nation to popular programs such as Lost Girl, Bitten and Continuum, and the upcoming series Olympus.

In Dark Matter, the crew of a derelict spaceship is awakened from stasis with no memories of who they are or how they got on board. Facing threats at every turn, they have to work together to survive a voyage charged with vengeance, betrayal and hidden secrets.

Founded in 2006 by Jay Firestone and later joined by executive producer Vanessa Piazza, Prodigy Pictures leads the way in the production of quality television, film, and cross-platform media. Prodigy is responsible for the critically-acclaimed television series Lost Girl, which has electrified viewers around the world and amassed a cult-like following. Lost Girl just wrapped production on its final season. Prodigy’s other credits include indie horror The Dark Stranger and the original television miniseries XIII as well as XIII: The Series.