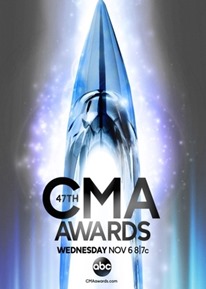 Taylor Swift will perform with Vince Gill and Alison Krauss as one of three superstar collaborations to highlight the 47th annual CMA Awards, airing on ABC on Wednesday, November 6th at 8/7C. As well, CNA-nominated Zac Brown Band will be joined by Dave Grohl of the Foo Fighters, and current CMA New Artist of the Year Hunter Hayes will perform with Jason Mraz.

Brad Paisley and Carrie Underwood will once again the awards. The press release follows the jump.

“Country Music’s Biggest Night™” will get an added dose of star power as some of music’s biggest names join forces to perform together on “The 47th Annual CMA Awards” airing WEDNESDAY, NOVEMBER 6 (8:00-11:00 p.m., ET) on the ABC Television Network.

“The CMA Awards are renowned for presenting those one-of-a-kind collaborations that everyone is talking about the next day,” said Ed Hardy, President of the CMA Board of Directors. “This year is no exception and these unique collaborations are not to be missed.”

Swift is tied as one of the year’s top nominees, earning six nominations including Entertainer and Female Vocalist of the Year, Album of the Year for RED, and Single, Musical Event, and Music Video of the Year for “Highway Don’t Care” with Tim McGraw and Keith Urban. She has 21 career CMA Awards nominations and seven trophies.

Gill is nominated this year for Musical Event of the Year for “Don’t Rush” with Kelly Clarkson. The Country Music Hall of Fame member is an 18-time CMA Award winner, including two wins for Entertainer of the Year and five for Male Vocalist of the Year. He is the fourth-most nominated artist in CMA history, with 52 career nominations.

Krauss is an eight-time CMA Award winner with 24 career CMA Awards nominations. She was awarded her first trophies in 1995 when she was named Female Vocalist of the Year and also won the Horizon Award (now known as New Artist of the Year), Single of the Year for “When You Say Nothing At All,” and Vocal Event of the Year for “Somewhere In The Vicinity of the Heart” with Shenandoah.

Zac Brown Band are 13-time CMA Awards nominees who took home the New Artist of the Year trophy in 2010. The group is nominated this year for Vocal Group of the Year, a category they have been nominated in every year since 2009.

Grohl is the 13-time GRAMMY Award-winning founder and frontman of Foo Fighters. He recently made his debut as a feature documentary director/producer with “Sound City,” named for the legendary Van Nuys, Calif. studio where he recorded his first full album as drummer for Nirvana, the generation-defining Nevermind.

Hayes earned his first CMA Award nomination last year when he was up for New Artist of the Year, which subsequently became his first CMA Award when he took the trophy home. Hayes recently celebrated his third consecutive No. 1 single, his fourth single of his platinum-selling debut album, Hunter Hayes, and is currently on his sold-out "I Want Crazy Tour."

Mraz, a multi-GRAMMY Award®-winning singer/songwriter, burst onto the scene with his 2002 single "The Remedy (I Won’t Worry)" and has since earned platinum and multi-platinum certifications in more than 20 countries for his various releases. His latest album, Love Is A Four Letter Word, featuring multi-platinum single "I Won’t Give Up," debuted at No. 2 on the Billboard 200 Album chart.

Tickets for “The 47th Annual CMA Awards” are officially sold-out, marking the fifth year in a row the ceremony has sold out in advance.

Winners of “The 47th Annual CMA Awards” will be determined in a final round of voting by eligible voting members of the Country Music Association. CMA Awards balloting is officiated by the international accounting firm of Deloitte & Touche LLP. Voting for the CMA Awards final ballot ends Monday, Oct. 28 (5:00 PM/CT).

The CMA Awards nominees and winners are determined by more than 7,000 industry professional members of CMA, which was formed in 1958 as the first trade organization to promote an individual genre of music. The first “CMA Awards Banquet and Show” was held in 1967. The following year, the CMA Awards was broadcast for the first time – making it the longest-running, annual music awards program on network television. The CMA Awards moved to ABC in 2006, where it will remain through 2021.

Official merchandise for “The 47th Annual CMA Awards” is available now at CMAawards.com.

“The 47th Annual CMA Awards” is a production of the Country Music Association. Robert Deaton is the Executive Producer, Paul Miller is the Director, and David Wild is the writer. The special will be shot in high definition and broadcast in 720 Progressive (720P), ABC’s selected HDTV format, with 5.1 channel surround sound.
Chevrolet™ is the Official Ride of Country Music. American Airlines is the Official Airline of the CMA Awards.

For information, visit CMApress.com for CMA Awards history, photos, press releases and logos. Online media credentialing for the CMA Awards closes Oct. 18. This is a protected site for the media only with restrictions on use. Keep up to date with the latest CMA news by following us on Twitter at Twitter.com/CMAmedia and on the official online home of the event, CMAawards.com.