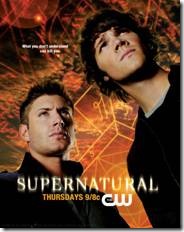 Somewhere between those two. The real question was whether or not there was =going= to be a third book. Luckily, sales on “Nevermore” were even greater than expected, so a third book was green-lit very quickly.

So, what can you tell us about Bone Key without spoiling readers too much?

It takes place a week after “A Very Supernatural Christmas,” over New Year’s week 2008. The action occurs in Key West, Florida, and it ties into both the local folklore of the Keys and into the opening of the Devil’s Gate at the end of (the season 2 finale) “All Hell Breaks Loose.”

How closely do you work with the Supernatural team in Los Angeles in terms of storyline (or particular elements to include or omit from the story) so that details coincide with what has been or will be presented on screen?

I don’t work with them at all. There’s a chain of command: I work with my editor, my editor works with Warner Brothers licensing, and Warner licensing works with the producers of the show. I can say that I was told by my editor that (show creator) Eric Kripke his own self approved Bone Key’s manuscript with no changes. Also, the scripts for the entire third season were sent to me long before they aired, so I was aware of everything through to “Jus in Bello” when I wrote the book, even though I turned it in January. 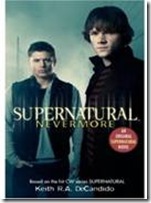 A recurring critique for Nevermore has been the lack of some “bone-chilling horror.” Is this something that will be addressed in this new book?

I hope so. I was conscious of those critiques, and looking back, “Nevermore” coulda used more chills. So I made sure to ramp up the horror content in “Bone Key.”

On the other hand, a recurring compliment has been the characterization of Sam and Dean and their brotherly relationship. Are there more insights that readers can look forward to?

Well, I certainly hope so. The relationship between those two is a big part of what makes the show so appealing.

How long does it take to complete one novel? Do you focus on just one product at a time, or juggle multiple assignments?

As much time as they give me. I’ve had as long as six months and as little as two weeks. Usually I’m juggling several projects at once in terms of overall stuff, but in terms of actually sitting down and writing the manuscript, it’s generally one at a time.

Can you give us some insights into your creative process? What really goes on in the mind of a writer?

P.G. Wodehouse once answered a similar question: “I just sit at the typewriter and curse a bit.” Basically, I’m always writing to some extent or other, always thinking about stories, about characters, about plot and sometimes that all coheres into a book.

Supernatural fans have developed a reputation as some of the most pro-active, protective, vocal and eloquent fans out there when it comes to the Winchester men. Is this an intimidating concern in such a project? What has been your experience with the feedback so far?

Honestly? While that reputation is deserved to some extent, it doesn’t make Supernatural fans even remotely unique. On both a fan and professional level, I’ve been involved with the fandoms of Star Trek, Buffy/Angel, X-Files, Highlander, Hercules/Xena, World of Warcraft, Starcraft, Farscape, Andromeda, Marvel and DC Comics, and a whole lot more. All of those fandoms are/were pro-active, protective, vocal, and eloquent, some to a degree that make the Supernatural fans look like pikers. This is by way of saying it isn’t remotely intimidating because it’s par for the course when writing something that has a dedicated fan base. And my experience with the feedback has been just fine. It hasn’t all been favorable, but I don’t expect it all to be.

Nevermore included an impressive playlist of music referenced in the novel. What is currently on your ipod?

Well, all the stuff on the playlist and a whole lot more besides, ranging from Jethro Tull to Tom Waits to the Austin Lounge Lizards, Randy Bandits, The Who, Arlo Guthrie, Dire Straits, Tito & Tarantula, Sting, Cats Laughing, Ian Dury & the Blockheads, Bruce Springsteen, and more.

Let’s see if we can get some insight into “Keith”. Tell us a little about yourself… writing influences… favorite hobbies… pets… what the R.A. stands for… the most common adjectives used by your friends to describe you (and remember, this is a family publication)?

My writing influence is life. Though I can say that the writings of P.G. Wodehouse, Ursula K. Le Guin, J.R.R. Tolkien, and Robert A. Heinlein were imprinted on me at a =very= young age. My favorite hobby is probably following the New York Yankees. I also practice karate — I’m now a brown belt — but I don’t know if that counts as a hobby, exactly. My fiancée and I share our home with two cats, a fat, cranky, 16-year old, part-Siamese named Marcus, and an adorable 4-year old bundle of energy named Aoki, who’s a Tortoiseshell. The R.A. stand for my father’s first name and mother’s maiden name. And if this is a family publication, I’m afraid I =can’t= tell you the adjectives my friends use.

Keith, thank you so much for taking the time to speak with us.

Oh, and before we go, I really feel the need to ask a bonus question: So… what color are Dean’s eyes?

Actually, what’s hysterical? I’ve gotten tons of e-mail on this subject, =but they don’t all agree on what color his eyes are=!! Some say green, some say hazel! That actually made me feel a little better.

Well, there may not be a consensus on the green or hazel, but at least we can all agree they are not blue! Fans will certainly be eager to compare notes on other details, but even a casual reader should be able to enjoy an adventure of the Winchesters, complete with scares and thrills sprinkled with their trademark brotherly humor. The book will be available at the end of August, 2008.

* “Nevermore” is still available at bookstores and online.

* “Bone Key” can now be pre-ordered through Amazon.

* SUPERNATURAL can be seen on The CW network, Thursdays at 9 pm, returning to the schedule April 3, and with new episodes on April 24. www.cwtv.com/shows/supernatural