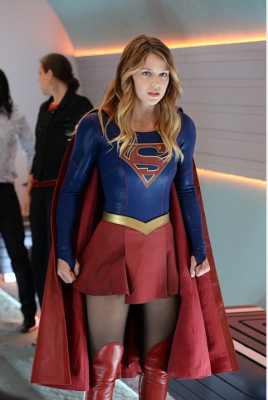 CBS’ freshman super hero series, Supergirl returns with all new episodes January 4th. Let’s take a look back and the season so far. Created by the trio of Ali Adler, Greg Berlanti, Andrew Kreisberg, Supergirl takes the DC Universe into a decidedly, lighter direction than it’s other properties. At first blush it seems like a very weird fit for a network that has a tendacy to skew older. But when you think about it, this is also the home of shows like The Big Bang Theory and Two Broke Girls.

The team behind Supergirl is the same team that brought us The Flash and Arrow. I asked Executive Producer Greg Berlanti to confirm if Supergirl takes part in the same universe as his other DC shows and he said yes, but don’t expect to see any cross-over eps.  Why can’t the DC Movie verse hire Berlanti? The man has a clear love of these various properties and his vision for each one is unique to each character. He and his partners understand that Superman and by extension Supergirl are hopeful heroes.

The production design on this show reflect that hopeful tone. Much like Metro City on The Flash, the world of National City is bright, sunny and shiny. You see crystal blue waters and chrome buildings that reach the sky as the city’s newest hero fly by. Considering I watch a lot of dark programs, I look forward to the slice of cheerful, naivety this show brings.

I didn’t like Melissa Benoist on Glee, but that show’s issues in S5 went far beyond her. While I didn’t have any affinity or expectations for the character, it just seemed a bit weird. However, she’s perfect and wears the suit well. Her non super girl alter ego – Kara Danvers is a bit too much like the old school, clutzy Clark Kent, which is a version that I’ve never liked. I wish they made her more realistic like the modern Dean Cain (although not as smug) or Tom Welling version of Clark. Someone who has a real personality and some sort of confidence. Here Kara the lack of confidence and klutziness makes Kara too much of a caricature which I’m hoping gets toned down a bit in the 2nd half. With that said it’s hard not to root for her. 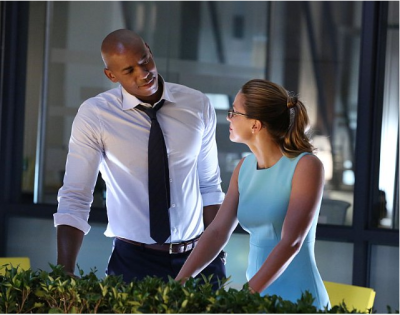 One of the things that I love and have concerns for is that by the end of the pilot episode it seems like everyone in Kara’s little world knows her secret. So we, as an audience, don’t have to constantly wonder how can these people NOT know and I’m kind of a Pollyanna, I like it when my heroes have friends and family that support them.

Kara’s support team includes Superman’s best friend James Olson (Mehcad Brooks) who left metropolis because he wanted to get out from his friend’s shadow, the loveable and equally awkward computer nerd Winn (Jeremy Jordan) who has a mad crush on her, her super agent sister Alex (Chyler Leigh) and her super team of DEO Agents. Instead of the Daily Planet, Kara works for the boss from hell Cat Grant (Calista Flockhart).  Kara splits her time between CatMedia and a super secret Alien Hunting agency run by Hank Henshaw. (David Harewood)

The first part of season one was all about introducing the players and maneuvering the chess board. It seems that Kara’s mother was some sort of judge on Krypton who impression a whole bunch of people including her twin sister Alura on a ship and sent them into the phantom zone. When Kara’s ship fell out of orbit it dragged the ship to earth, thus releasing a lot of Alien criminals onto the earth. The DEO’s is tasked with capturing these Aliens. My fear with this show is that it’s going to end up being a lame monster/villain of the week story. So far I’ve been pleasantly surprised that while this is exactly what the show is, it hasn’t been boring yet and they have kept the fights with the villains to a minimum. So the characters haven’t gotten lost in the shuffle. 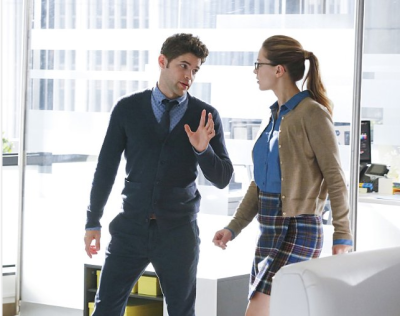 I love Kara’s relationships with her team, however I can do with the lame love triangle between Jimmy, Kara and Winn. It’s handled like they were in Jr. High School and not functioning adults. In the beginning of the season I loathe Cat Grant, it was the stereotypical bitchy boss and had no depth or layers to her but by episode 9 we started to get a glimpse of her underlying layers. I get the sense that maybe Calista may have said something about the direction.

Hank Henshaw wasn’t much better than Cat in his treatment of Super Girl as a child who didn’t know what she was doing (which was true, I just didn’t need to see it every episode). I really liked that they answered the mystery surrounding Hank early on in the series, but I’m concerned as to where they take it for the rest of this season and in the future.

James and Win are likable characters, but again I can do without the romance. Why is it impossible for men and women to be besties on television without constantly junking things up with unrequited love? Considering Winn knows Kara’s secret, if she breaks his heart it can’t end well.

I binged all 9 eps over the holidays and am fully down for this ride. I need a show in my life that’s about hope. Supergirl provides just enough sugar in an otherwise bleak diet. People used to dark and grim, need not bother, it’s not for you. The rest of us will enjoy it for the pure, blissful fun that it is.