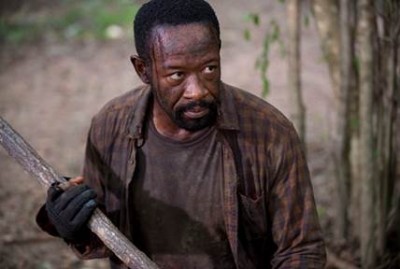 AMC is making Sunday, November 1st a memorable date for fans of The Walking Dead (Sundays, 9/8C) with a ninety-minute episode – but that’s not all.

FOR IMMEDIATE RELEASE – Tune in this weekend for “The Walking Dead Mega Sunday” event on November 1st at 9:00 p.m. ET/PT.  In this all-new 90-minute episode of “The Walking Dead,” “Here’s Not Here,” written by Scott M. Gimple and directed by Stephen Williams, the survivors must ask themselves who can be trusted, and better yet, can they change? Following the new episode, “Talking Dead” will air at 10:30 p.m. ET/PT.

During the extended episode of “The Walking Dead,” AMC will air the world premiere of the trailer for AMC’s upcoming, highly anticipated series “Preacher,” as well as the television premiere of the “Into the Badlands” trailer.

Based on the twisted and popular ‘90s comic book franchise of the same name, “Preacher,” created by Garth Ennis and Steve Dillon, is the story of Jesse Custer (Dominic Cooper) a conflicted Preacher in a small Texas town who is inhabited by a mysterious entity that allows him to develop a highly unconventional power. Jesse, his ex-girlfriend, Tulip (Ruth Negga), and an Irish vampire named Cassidy (Joseph Gilgun) embark on a journey to, literally, find God. The Sony Pictures Television and AMC Studios co-production was developed for television by Seth Rogen & Evan Goldberg (“This Is the End,” “Superbad,” “Neighbors”) and showrunner Sam Catlin (“Breaking Bad”). The series is set to premiere mid-2016.

For additional information regarding “The Walking Dead,” “Into the Badlands” and “Preacher” please visit the AMC press site at www.press.amcnetworks.com.