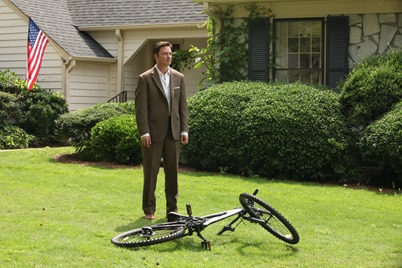 SundanceTV’s critically acclaimed Rectify (#4 on my 2013 best off list), returns on June 19th (9/8C). Season one followed Daniel Holden after his release from death role into a world he found almost utterly alien and trying to find his place in it. Season two finds Daniel Holden beginning to think about the future and trying to take charge of his life and ‘find meaning in a dangerous and unpredictable world.’

Rectify stars Aden Young as Daniel, and was created by Ray McKinnon (Deadwood, Sons of Anarchy). For more, check out the press release after the jump.

New York – March 6, 2014 – SundanceTV announced today that the second season of its critically acclaimed scripted series “Rectify” will premiere on Thursday, June 19, 2014 at 9:00pm ET/PT. The haunting story of a man released from prison after spending nearly two decades on death row, “Rectify” has been overwhelmingly well-received by critics and has landed on numerous year-end top ten lists in 2013. Matt Roush at TV Guide rated the series a “10 out of 10” and called it “TV’s most absorbing, unsettling new drama.”  The Daily Beast dubbed “Rectify” “the best new show of 2013” and Mary McNamara at the Los Angeles Times said “‘Rectify’ is a revelation that sets a new standard… a game changer.” “Rectify” is created and written by Ray McKinnon (The Accountant, “Deadwood,” “Sons of Anarchy”) and executive produced by Mark Johnson and Melissa Bernstein, the Emmy Award® winning producers behind “Breaking Bad” and the upcoming “Halt and Catch Fire.”

Season one of “Rectify” depicted one week in the life of Daniel Holden (Aden Young) following his release from death row to a world he no longer understood, to build a life he may not be allowed to keep. As Daniel tried to find a place in his reconfigured family and within a community deeply divided about his return, his presence reignited old wounds and introduced unexpected complications for those closest to him. In season two we find Daniel becoming an active participant in his life, making decisions and thinking about the future as he struggles to find meaning in a dangerous and unpredictable world. It will also delve into the lives changed by Daniel’s return and the ripple effect his actions have on the people around him.

Sarah Barnett, Sundance Channel President and GM, stated, “The response to ‘Rectify’ has been incredible. We feel as though this story has tapped into something truly unique, with both critics and audiences using their platforms to share such strong, personal reactions to this very distinctive TV series. There’s so much drama and character that’s been set up in the first season, it will be electrifying to see where ‘Rectify’ goes in season two.”

Also starring in “Rectify” alongside Aden Young (Killer Elite, The Tree) as Daniel Holden are Abigail Spencer (“Mad Men,”  Oz the Great and Powerful, “Burning Love”), who portrays Amantha Holden, Daniel Holden’s younger sister who believes completely in his innocence and has devoted her entire adult life to securing his release; J. Smith-Cameron (“True Blood,” Margaret) who plays Janet Talbot, Daniel’s loving mother, who has been living with the impending death of her son for nineteen years and who long ago had made peace with the loss of her son, giving up on any hope for his release; Luke Kirby (Take this Waltz, “Slings and Arrows”)  tackles the role of  Jon Stern, Daniel’s lawyer who works for an organization dedicated to exonerating the wrongfully convicted; Clayne Crawford (A Walk to Remember) portrays Ted Talbot, Jr., Daniel’s stepbrother whom he had never previously met; Adelaide Clemens (The Great Gatsby, “Parade’s End”) plays Tawney Talbot, Ted’s kind-hearted wife; Bruce McKinnon (Lawless, “The Wronged Man”) plays Daniel’s step-father Ted Talbot Sr.; and Jake Austin Walker (The Chaperone) plays Daniel’s half-brother Jared.

“Rectify” is currently shooting on location in Griffin, Georgia, near Atlanta.

SundanceTV is making and celebrating television as distinctive as the best independent films. Working with today’s most remarkable talent, SundanceTV is attracting viewer and critical acclaim for its original scripted and unscripted series. Launched in 1996 and owned and operated by AMC Networks Inc., SundanceTV delivers on the spirit of founder Robert Redford’s mission to celebrate creativity.  www.sundance.tv
About AMC Networks Inc.
Dedicated to producing quality programming and movie content for more than 30 years, AMC Networks Inc. owns and operates several of the most popular and award-winning brands in cable television. AMC, IFC, Sundance Channel, WE tv, and IFC Films produce and deliver distinctive, compelling and culturally relevant content that engages audiences across multiple platforms. The company also operates AMC/Sundance Channel Global, an international programming business, and AMC Networks Broadcasting & Technology, a full-service network programming feed origination and distribution company.