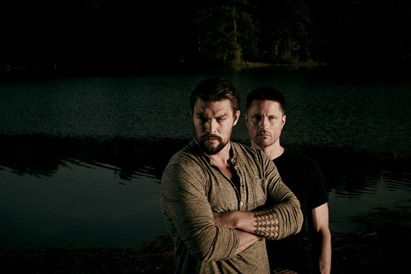 Sundance Channel – which has made one heckuva splash with its entry into the realm of scripted drama with Rectify, The Returned and Top of the Lake – has announced a launch date for its new drama series, The Red Road. The series – which stars Martin Henderson, Jason Momoa, Julianne Nicholson, Lisa Bonet and Tom Sizemore, among others – revolves around a local sheriff who has to keep his family together while policing two clashing communities: a small town just outside New York City (where he grew up) and the neighboring mountains, home to a tribe of federally unrecognized Native Americans.

The Red Road premieres on Sundance Channel Thursday, February 27th (9/8C). Check out the press release after the jump.

New York – January 6, 2014 – Sundance Channel announced today that its highly anticipated next original scripted series “The Red Road” will premiere on February 27, 2014 at 9pm ET/PT. On the heels of the Emmy® and Golden Globe®-nominated “Top of the Lake” and the critically acclaimed dramas “Rectify” and “The Returned,” “The Red Road” is a complex thriller that marks a continued commitment by the network to offer daring, fresh, scripted entertainment.

“The Red Road” is a gripping, dramatic thriller that presents two distinct visions of America today as played out through the conflict between two different men.  The series revolves around a local sheriff (Henderson) struggling to keep his family together while simultaneously policing two clashing communities: the small town where he grew up just outside of New York City, and the neighboring mountains—home of a federally unrecognized Native American tribe.  After a terrible tragedy and cover-up further divides these worlds, an uneasy alliance is forged between the officer and a dangerous member of the tribe (Momoa).  As each of the two men find themselves increasingly compromised by the other and the emotional ghosts of their collective pasts begin to emerge, the lives of both quickly unravel, leading to terrible consequences. A link to view the trailer is available here: http://www.youtube.com/watch?v=fV9_4sbY0Z0.

“‘The Red Road’ is a thrilling journey,” said Sarah Barnett, President and GM of Sundance Channel. “While the show moves at a cracking pace, it also has multiple layers to it: lost dreams, racial tension, tragedy, and the pain of love.  It’s a unique show, unlike anything out there right now, and we hope viewers will love it as much as we do.”

“The Red Road” is Sundance Channel’s second wholly owned original scripted series; its first was the acclaimed “Rectify,” which returns for a second season in 2014. The channel will also premiere the original mini-series “The Honorable Woman,” starring Maggie Gyllenhaal and co-produced with BBC Worldwide in 2014.