The Korean director Park Chan-wook has made at least one film – Oldboy, allegedly being remade by Spike Lee – that is generally considered to be a classic. I don’t know if Park’s first film in English, Stoker, will ever approach that film’s critical acclaim, but I have no doubt if it had been shot in Korean, it might well have been (sometimes, subtitles really do make a difference to an audience’s perceptions).

Following the death of Richard Stoker (Dermot Mulroney, pivotal in flashbacks) on daughter India’s (Mia Wasikovska) eighteenth birthday, brother Charlie (Matthew Goode) arrives in time for the funeral – though he watches from a distance, he does not go unnoticed by his niece.

Following the funeral, he arrives at the lovely Stoker estate for the reception where he is warmly greeted by Richard’s widow, Evelyn (Nicole Kidman). Before long, he has insinuated himself into their lives – though disappearances seem to follow him. To say that he has an unusual effect on the Stoker women would be an understatement.

Stoker might be called a psychological thriller/horror movie, but it doesn’t really play by the accepted rules of the genre. It moves with the stately grace of a British character drama, but with a sensuality that reminds of the French New Wave – Godard with a bit of Patricia Highsmith folded together in Park’s unique style. 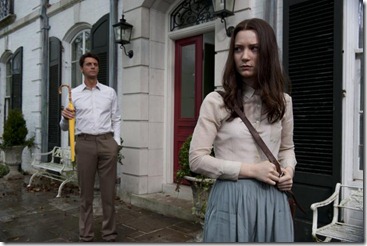 The deliberate pace allows us to think we’re getting to know the characters, but Park again may be playing games with our perception. Surely no eighteen-year old girl is as glacial as India seems to be at first, nor could the very Tom Ripley-like Charlie really be that creepy without someone noticing.

Goode gives Charlie a mocking not-quite-charm; a keen, but not necessarily perceptive intelligence. Kidman’s Evelyn seems too eager to recover from her grief – or maybe she’s just trying to displace her grief with Charlie’s attention. For India, Wasikovska plays it much closer to the vest, only letting her inner fire surface in a couple of places – for unexpected reasons and in equally unexpected ways.

As shot by Park’s frequent collaborator, Chung-hoon Chun, the film is gravely beautiful; the compositions elegant and spare at the same time – creating an eerie mood that perfectly fits the film’s title, a reference to the author of Dracula but without actually going to a supernatural place.

Because of its pace and tone, Stoker is not an easy film, but its richness of detail and play with characters and events certainly make it a rewarding one.

Photos by Macall/Courtesy of Fox Searchlight