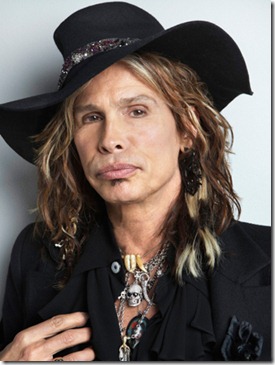 Steven Tyler has decided to depart his role as a judge on AMERICAN IDOL. Tyler served as a judge during the 10th and 11th seasons of IDOL.

STEVEN TYLER HAS DECIDED TO DEPART HIS ROLE

AS JUDGE ON “AMERICAN IDOL”

Steven Tyler has decided to depart his role as a judge on AMERICAN IDOL. Tyler served as a judge during the 10th and 11th seasons of IDOL.

‘After some long…hard…thoughts…I’ve decided it’s time for me to let go of my mistress American Idol before she boils my rabbit,” said Tyler. ‘I strayed from my first love, AEROSMITH, and I’m back – but instead of begging on my hands and knees, I’ve got two fists in the air and I’m kicking the door open with my band. The next few years are going to be dedicated to kicking some serious ass – the ultimate in auditory takeover…On Nov. 6, we are unleashing our new album, Music from Another Dimension on the Earth, Moon, Mars, and way beyond the stars…IDOL was over-the-top fun, and I loved every minute of it…Now it’s time to bring Rock Back. ERMAHGERD.’

‘It’s been a tremendous honor to have Steven – one of the most prolific artists in the world – on AMERICAN IDOL for the past two seasons,’ said Mike Darnell, President of Alternative Entertainment, Fox Broadcasting Company. ‘He’s been a terrific judge, a true friend and great mentor to everyone involved with the show, and we know he’ll continue to be a huge inspiration to IDOL hopefuls for years to come. We are very sad that Steven has chosen to focus more on his music, but we always knew when we hired a rock ’n’ roll legend, he would go back to the music. We all wish him all the best and would love to have him back on the show anytime.’

‘Steven Tyler is a real Idol, a rock legend. If you had told me 10 years ago he would be a judge on AMERICAN IDOL, I would have thought it impossible,’ stated IDOL creator and executive producer Simon Fuller. ‘The fact that this became a reality and we had the pleasure of him gracing our stage for two seasons makes me very proud. I completely understand his desire to get back to his life as the singer in America’s greatest-ever rock band. AMERICAN IDOL will miss him!’

‘We’re all very thankful and privileged that Steven joined AMERICAN IDOL two years ago,’ said Cecile Frot-Coutaz, CEO, FremantleMedia. ‘A true music icon, he not only brought rock ’n’ roll to the show, but also his exceptional taste in spotting and nurturing undiscovered talent. We will sincerely miss his poetic phrases, his remarkable creativity and his unique spirit. We’re sad about his departure from the show, but understand his decision to return to music full-time and hope he’ll be back to grace the AMERICAN IDOL stage in seasons to come.’