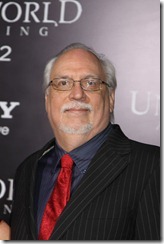 DeKnight’s project, Incursion, deals with interstellar war and follows a squad of human soldiers as they take the battle to a hostile alien race.

Stracynski is working on Vlad Dracula, a series that will blend elements of the life of the historical figure known as Vlad the Impaler with the fictional Dracula.

AND "VLAD DRACULA" FROM

IN DEVELOPMENT AT THE NETWORK

As part of STARZ overall deal with “Spartacus” creator Steven S. DeKnight, STARZ is developing “Incursion,” an epic science fiction action-thriller that follows a squad of soldiers caught in a war against a hostile alien race. Each season the battle will be fought on a new, exotic planet as humanity punches deeper into enemy territory. Grittily realistic combat, darkly complex characters and intrigue on a cosmic scale will permeate the tale of fighting men and women facing the pressures of war and an enemy unlike any ever seen. In addition to his international acclaim on “Spartacus,” Steven has worked on such well-regarded series as “Buffy The Vampire Slayer,” “Angel,” “Smallville,” and “Dollhouse.”

J. Michael Straczynski is the wildly successful writer and producer whose credits include such fan classics as Thor, Underworld: Awakening, “Babylon 5,” and The Changeling. He has teamed with horror master Roy Lee, whose credits include such hits as The Ring, The Strangers, and The Woman in Black in developing "Vlad Dracula" with veteran producer Rob Tapert, whose credits include the international STARZ hit series, “Spartacus,” iconic “Xena: Warrior Princess,” Evil Dead and The Grudge. The project is a unique spin of the classic tale, blending the historical facts of the 15th century Prince of Wallachia, with the fictional Dracula whose story is known around the world and continues to fascinate audiences. “Vlad Dracula” traces his evolution from a revered ruler to the world’s most feared vampire, and his slow downfall as he struggles desperately to hang on to his humanity, his wife and his kingdom.

Managing Director of Starz, Carmi Zlotnik said “Steven S. DeKnight, J. Michael Straczynski, Roy Lee and Rob Tapert are legendary talents, having created some of the most groundbreaking and iconic television series with incredibly passionate fan bases the world over. We are thrilled to work with such sophisticated auteurs and producers as we grow the slate of unique STARZ Original series.”