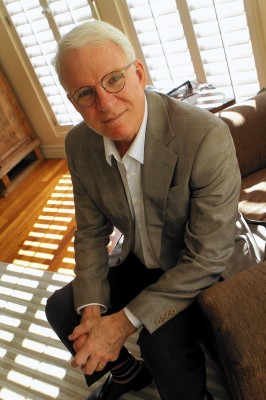 From wild & crazy guy, to Roxanne to thoughtful novelist, Steve Martin has been entertaining us and provoking though for over45 years.

On June 4, 2015, he will receive the AFI Life Achievement Award – America’s highest honor for a career in film – an award that will be aired on TNT that month. Follow the jump for further details.

Tribute to Air on TNT in June 2015, with Encore on Turner Classic Movies

LOS ANGELES, CALIF. – Sir Howard Stringer, Chair of the American Film Institute’s Board of Trustees, announced today the Board’s decision to honor Steve Martin with the 43rd AFI Life Achievement Award, the highest honor for a career in film. The award will be presented to Martin at a gala tribute in Los Angeles, CA on June 4, 2015. The 43rd AFI Life Achievement Award tribute special will return for its third year on TNT when it airs in June 2015, followed by encore presentations on sister network Turner Classic Movies (TCM).

“Steve Martin is an American original,” said Stringer. “From a wild and crazy stand-up comic to one who stands tall among the great figures in this American art form, he is a multi-layered creative force bound by neither convention nor caution. His work is defined by him alone, for he is the author – and a national treasure whose work has stuck with us like an arrow in the head. AFI is proud to present him with its 43rd Life Achievement Award.”

One of the most diversified performers and acclaimed artists of his generation, Steve Martin is an actor, comedian, author, playwright, screenwriter, producer and musician. Recipient of an Emmy®, four Grammy® Awards, a Kennedy Center Honor and an Honorary Oscar®, Martin first rose to prominence as a stand-up comedian and quickly established himself as a leading man with a body of work defined by his unique creative voice.

Martin began his career writing for The Smothers Brothers Comedy Hour and in 1969, won an Emmy for his work. Through the 1970s, he made a number of memorable TV appearances, including iconic spots on The Tonight Show Starring Johnny Carson and Saturday Night Live, as well as comedy essays and albums.

The big screen beckoned. Martin’s first film was a seven-minute short he wrote and starred in, “The Absent-Minded Waiter.” The film was nominated for an Academy Award® for Best Live Action Short Film in 1977. In 1979, he had a breakout role as the sweet and clueless Navin Johnson in The Jerk, which Martin also co-wrote. It was a perfect showcase for his distinct comedic sensibilities – earnest, innocent and absurd – and it launched him into the zeitgeist. Pennies from Heaven (1981) followed, and he went on to become a bankable big-screen star, with distinct roles in films such as Dead Men Don’t Wear Plaid (1982), The Man with Two Brains (1983), Three Amigos! (1986), Little Shop of Horrors (1986) and Dirty Rotten Scoundrels (1988), while also embodying an endearing everyman in All of Me (1984), Planes, Trains and Automobiles (1987), Roxanne (1987) and Father of the Bride parts I and II (1991, 1995). He proved himself more than just a funnyman in bittersweet ensemble works including Parenthood (1989), Grand Canyon (1991), L.A. Story (1991) and Shopgirl (2005), a film which he wrote based on his own novella of the same name.

In addition to his beloved film credits and his successful writing career, Martin is also an accomplished musician. He recently premiered his new musical Bright Star at the Old Globe Theater, featuring original music by Martin and songwriter Edie Brickell, inspired by their Grammy-winning collaboration “Love Has Come For You.”

Steve Martin was born in Waco, Texas, but was raised mostly in Southern California. As a teenager, Martin sold guidebooks and performed magic tricks at Disneyland – honing his craft among seasoned performers at the Happiest Place On Earth. He studied philosophy at Long Beach State College but eventually transferred to the theater program at the University of California, Los Angeles. He then left college altogether to become a comedy writer for The Smothers Brothers Comedy Hour, winning an Emmy® in 1969.

In the 1970s, Martin performed stand-up comedy in local clubs, wrote for The Sonny and Cher Comedy Hour and appeared on The Tonight Show Starring Johnny Carson and Saturday Night Live. In 1979, he brought his offbeat humor to his first starring role in a feature film with The Jerk, which he also co-wrote.

He has also released four comedy albums between 1977 and 1981, winning Grammys® for Let’s Get Small and A Wild and Crazy Guy. He received a Gold Record for his hit comedy song “King Tut” and recently won another Grammy for Best American Roots Song for “Love Has Come For You,” off his nominated album of the same name. An accomplished playwright and essayist, he wrote his first book, Cruel Shoes, in 1977.

About the AFI Life Achievement Award

“The recipient should be one whose talent has in a fundamental way advanced the film art; whose accomplishment has been acknowledged by scholars, critics, professional peers and the general public; and whose work has stood the test of time.”

Steve Martin joins an esteemed group of individuals who have been chosen for this distinguished honor since its inception in 1973.

About the American Film Institute

AFI is America’s promise to preserve the history of the motion picture, to honor the artists and their work and to educate the next generation of storytellers. AFI programs include the AFI Catalog of Feature Films and AFI Archive, which preserve film heritage for future generations; the AFI Life Achievement Award, the highest honor for a career in film; AFI Awards, honoring the most outstanding motion pictures and television programs of the year; AFI’s 100 Years…100 Movies television events and movie reference lists, which have introduced and reintroduced classic American movies to millions of film lovers; year-round and special event exhibition through AFI FEST presented by Audi, AFI DOCS and the AFI Silver Theatre and Cultural Center; and educating the next generation of storytellers at the world-renowned AFI Conservatory.

TNT is television’s destination for drama. Seen in 101 million households and ranking among cable’s top networks, TNT is home to such original drama series as Rizzoli & Isles, Major Crimes, Falling Skies, The Last Ship, Murder in the First, Legends, Perception, Dallas and Franklin & Bash. TNT’s upcoming slate of original scripted dramas includes The Librarians, Public Morals, Proof and Transporter The Series, which will make its U.S. television debut on the network this fall. TNT also features such dramatic unscripted series as Cold Justice and the upcoming On the Menu and Wake Up Call. In addition, TNT is the cable home to popular dramas like Castle, Bones and Supernatural; primetime specials, such as the Screen Actors Guild Awards®; blockbuster movies; and championship sports coverage, including NASCAR, the NBA and the NCAA Division I Men’s Basketball Championship.