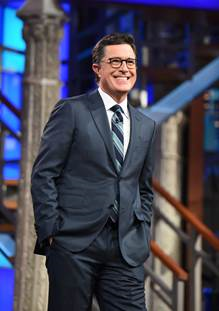 The announcement was made by Jack Sussman, executive vice president, specials, music and live events, CBS Entertainment, this afternoon.

This year’s Emmy ® Nominations will be announced on July 13th.

CBS and the Television Academy today announced that Emmy® Award winner Stephen Colbert, the multi-talented host of THE LATE SHOW with STEPHEN COLBERT, will host the 69th PRIMETIME EMMY AWARDS, marking his first time as master of ceremonies for the event. The Emmy Awards will be broadcast LIVE from the Microsoft Theater in Los Angeles on Sunday, Sept. 17 (8:00-11:00PM, live ET/5:00-8:00PM live PT) on the CBS Television Network.

“We’re excited to kick off the new season and celebrate the top achievements in television with Stephen Colbert as host of the PRIMETIME EMMYS,” said Jack Sussman, executive vice president, specials, music and live events, CBS Entertainment. “Stephen is the ultimate master of ceremonies with award-winning creative talents, and as we’ve seen the past few months, he has a fearless passion for live television. We look forward to honoring television’s best while entertaining audiences with the creative energy and sharp comedy of Stephen Colbert.”

“We are thrilled that Stephen Colbert will be bringing his Emmy-winning comedic talent to hosting this year’s Emmy Awards,” said Television Academy chairman and CEO Hayma Washington. “He’s a formidable showman and we are delighted to begin working with him and the entire CBS team.”

“This will be the largest audience to witness an Emmys, period,” said Stephen Colbert. “Both in person and around the globe.”

Stephen Colbert is the host, executive producer and writer of THE LATE SHOW with STEPHEN COLBERT, which launched in September 2015 on the Network. Previously, he served as host, executive producer and writer of the long-running, multiple Emmy and Peabody Award-winning series “The Colbert Report,” on Comedy Central. Colbert has written multiple New York Times bestsellers, including I AM AMERICA (And So Can You!) (2007) and AMERICA AGAIN: Re-Becoming The Greatness We Never Weren’t (2012). He also won a Grammy Award in 2010 for his one-hour original musical holiday special, “A Colbert Christmas: The Greatest Gift of All!”

Nominations for the 69th PRIMETIME EMMY AWARDS will be announced Thursday, July 13 from the Academy’s Wolf Theatre at the Saban Media Center.

About the Television Academy

The Television Academy seeks to expand the horizons of television excellence. It strives to empower storytellers who shape the evolving television space through the programs, publications and events of the Academy and its Foundation. And it celebrates those who have led excellence by recording their stories and recognizing their achievements through accolades and awards, including television’s most coveted prize, the Primetime Emmy Award. For more information and updates on the 69th Primetime Emmy Awards, visit Emmys.com and follow @TelevisionAcad on Twitter, Facebook, Instagram, Tumblr and YouTube.