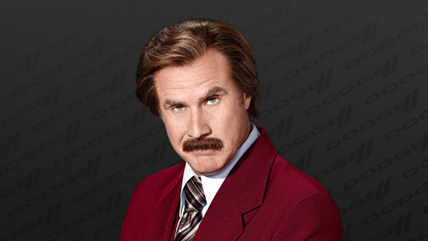 In an unusual move, Anchorman 2: The Legend Continues’ self-absorbed news guy, Ron Burgundy has been enlisted to promote the 2014 Dodge Durango. I’m not sure I see the logic behind that, but it does make for some fun, ‘70s-style commercials.

Check out the press release – with link to YouTube videos – after the jump. Anchorman 2: The Legend Continues premieres December 20th.

·         Television Spots Debut on Television and Online on Saturday, October 5

October 7, 2013, Auburn Hills, Mich. – The Dodge brand and Paramount Pictures have teamed up in a groundbreaking co-branded marketing collaboration that casts legendary news anchor “Ron Burgundy” as the new face of the new 2014 Dodge Durango as the automotive brand launches a multifaceted advertising and marketing campaign in advance of the holiday release of the upcoming film “Anchorman 2: The Legend Continues.”

Will Ferrell reprises his comedic role as Ron Burgundy, the boastful news anchorman in a robust campaign which debuts from Dodge, Saturday October 5th.  The integrated cross-promotion marketing campaign marks the first time a movie studio and brand tie-in has utilized starring talent, in character, to create original long and short form content.  The co-branded promotional advertising campaign will span television, print, digital and social media.  It will debut across television and online on Saturday, October 5.  The new 2014 Dodge Durango arrives in dealerships in North America this month. Anchorman 2: The Legend Continues releases nationally in theaters December 20, 2013.

"The Dodge brand’s irreverent tone and attitude make Ron Burgundy the perfect pitchman for the new 2014 Dodge Durango," said Olivier François, chief marketing officer of Chrysler Group LLC. “By joining forces with Paramount Pictures, ‘Anchorman 2: The Legend Continues’ and Will Ferrell, we’re able to show the new 2014 Dodge Durango and its cutting edge technology in a completely unexpected approach that is fresh, funny and culturally provocative to our audiences.”

The campaign brings together the might of the Detroit automaker, the Hollywood studio and the actor/comedian in a unique collective experience that promises to engage consumers through specifically created content across multiple platforms.

"Ron Burgundy as the new Dodge Durango spokesperson brings together two iconic American legends,” said Josh Greenstein, CMO of Paramount Pictures. "This campaign was an unprecedented opportunity to collaborate with our filmmakers to create new original content and distribute it worldwide in advance of the long awaited Anchorman sequel release this December.   With the personal involvement of Will Ferrell, our writer / director Adam McKay, the comedy team at Funny or Die, and the Dodge creative team at Wieden+Kennedy, we were able to create a truly epic partnership.”

Thecampaign’s co-branded television commercials and online web content, directed by Jake Szymanski, are set in a colorful auto showroom where Ron Burgundy  hilariously brings to life what makes Dodge such an entertaining, spirited brand and the Durango a superior SUV. As a leading news anchor and celebrity, pitching for Dodge—or anything else for that matter—is a cinch. He doesn’t need scripts or to study up on auto features. And because he’s Ron Burgundy, interpreting the modern Dodge Durango through his 1970s brain, he’s got a decidedly different take on the cross-over sport utility vehicle.

-      Horsepower: Ron Burgundy chastises a horse on the showroom floor regarding Dodge Durango’s 360 horsepower telling viewers, “On my right is the new Dodge Durango with up to 360 horsepower. On my left is one horse (points to horse). With one horse power.  That makes you feel pretty dumb, doesn’t it?”

-      Glove Compartment: Ron deflects speaking to Dodge Durango’s available Hemi V8 engine and instead compliments the luxuriousness/spaciousness of its “beautiful injection-molded thermoplastic olefin” glove box, letting viewers in on the fact that “it comfortably fits two turkey sandwiches or 70 packs of gum!”

-      Ride: Ron stumbles over his script noting the Dodge Durango’s m.p.g fuel performance. Given Ron’s propensity to read everything as written, he can’t figure out what m.p.g is, trying several times to get it right. “emm..pah..gahs? What? mup-ah-gahs? Imp-a-gahs? I’m saying it right…but it just doesn’t sound familiar.”

-      Ballroom Dancers: This two-part spot (a .60- and .30-spot) will debut on “Dancing with the Stars” on Monday, October 7. In the .60-second spot, Ron walks alongside the vehicle with ballroom music playing in background, noting its “power, precision, elegance, grace in form, truth in function” when a couple dancing glides upon the scene. Ron loses his temper and chases them off, yelling, “Hey, get out of here you dumb dancers! I told them 100 times they can’t dance in here.” He apologizes, asks them to come back, where upon he proceeds to only go after them a second time. In the 30-second spot, the couple sneaks onto thequiet floor presuming it’s safe to once again begin to dance.  Ron suddenly leaps out from the back seat of the Dodge Durango, in full pursuit of them.

“Just as Ron Burgundy is kind of a big deal, the 2014 Dodge Durango also stands out in a crowd with its combination of best-in-class power, towing, and fuel economy, in addition to its class exclusive technology,” said Tim Kuniskis, President and CEO, Dodge Brand. "The Dodge brand’s partnership with Paramount Pictures and ‘Anchorman 2: The Legend Continues’ aligns perfectly with our consumers’ sensibilities."

The co-branded campaign extends to national print placements with concepts based on the look and feel of Dodge advertisements from the ‘70s, with a Ron Burgundy spin. Print will begin running nationally in November.

“From the very first day of ‘Anchorman 2’ production, we have seen a relentless demand from fans for more Ron Burgundy,” commented LeeAnne Stables, EVP of  Worldwide Marketing Partnerships, Paramount Pictures. “This fully integrated Dodge campaign allows us to reach the broader movie audience through a massive television, print, and digital plan that will build even more anticipation for the film. Hats off to Dodge for being a groundbreaker in terms of content creation, and for securing a boastful pitchman that is as imbedded in American pop culture as the Durango itself.”

The integrated campaign, created in partnership with independent advertising agency Wieden+Kennedy, based out of Portland, Oregon, and Will Ferrell, will continue with additional content and consumer engagement opportunities in the coming months.

With the 70’s behind him, SanDiego’s top rated newsman, Ron Burgundy (Will Ferrell), returns to the newsdesk in "Anchorman 2: The Legend Continues."  Also back for more are Ron’s co-anchor and wife, Veronica Corningstone (Christina Applegate), weather man Brick Tamland (Steve Carell), man on the street Brian Fantana (Paul Rudd) and sports guy Champ Kind (David Koechner) – All of whom won’t make it easy to stay classy…while taking the nation’s first 24-hour news channel by storm. The film is directed by Adam McKay (“The Other Guys,” “Step Brothers”), based on characters created by Will Ferrell & Adam McKay, written by Will Ferrell & Adam McKay.

For nearly 100 years, Dodge has defined passionate and innovative vehicles that stand apart in performance and in style. Building upon its rich heritage of muscle cars, racing technology and ingenious engineering, Dodge offers a full-line of cars, crossovers, minivans and SUVs built for top performance – from power off the line and handling in the corners, to high-quality vehicles that deliver unmatched versatility and excellent fuel efficiency. Only Dodge offers such innovative functionality combined with class-leading performance, exceptional value and distinctive design. With the all-new 2013 Dodge Dart that achieves up to 41 miles per gallon, the all-new Dodge Charger paired with the ZF eight-speed transmission that achieves a class-leading 31 miles per gallon on the highway, the new Durango and the significantly revamped Grand Caravan – inventor of the minivan – Journey, Avenger and iconic Challenger, Dodge now has one of the youngest dealer showrooms in the United States.