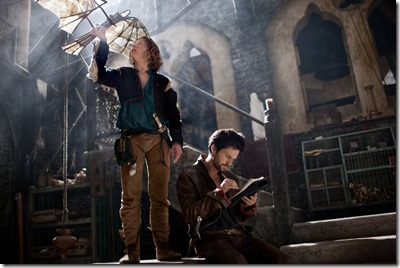 Starz Entertainment’s new eight-episode action-adventure series Da Vinci’s Demons is set to premiere on Friday April 12th at 10/9C, following the series finale of Spartacus: War of the Damned. Succeeding episodes will be run in the 9/8C slot.

The series, which follows the exploits of the young Leonardo Da Vinci comes from David S. Goyer (Man of Steel, The Dark Knight Trilogy) and – and trust me, I’ve seen the first three episodes – may be considerably less violent than Spartacus but is even more fun. For the official series description, check out the equally official press release following the jump.

Beverly Hills, Calif. – FOR IMMEDIATE RELEASE –Starz announced today that the historical fantasy “Da Vinci’s Demons,” an original series created by David S. Goyer, co-writer of The Dark Knight Trilogy, will premiere on STARZ in the U.S. on Friday, April 12 at 10 pm, following the finale of “Spartacus: War of the Damned.”  After the premiere on April 12th, the series will air Friday nights at 9pm et/pt. The eight-episode drama, produced by Adjacent Productions, follows the ‘untold’ story of the world’s greatest genius, Leonardo da Vinci, during his turbulent youth in Renaissance Florence.  BBC Worldwide is distributing the series internationally and Fox International Channels (FIC) has acquired the series across FIC’s portfolio of 200 pay -TV entertainment channels. FIC will be premiering the show to audiences in 120 countries in Latin America, Europe, Asia, the Middle East and Africa in the month of April.

Brilliant and passionate, the 25-year-old Leonardo da Vinci is an artist, inventor, swordsman, lover, dreamer and idealist. As a free thinker, with intellect and talents that are almost superhuman, he struggles to live within the confines of his own reality and time. He begins to not only see the future, but invent it. 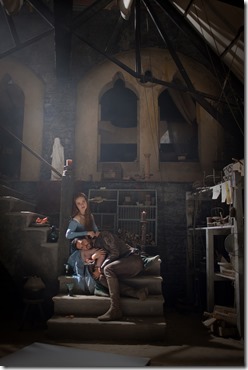 Goyer, who wrote the series, served as showrunner and directed the first two episodes, is also screenwriter of the highly anticipated Man of Steel premiering June 2013 and served as script consultant and story developer for “Call of Duty: Black Ops,” and “Black Ops II”, the most successful video game franchise of all time. Julie Gardner is Executive Producer, along with Jane Tranter, head of Adjacent Productions. The series was shot in Swansea this summer.  The series is produced by Adjacent Productions, a label launched in 2012 that sits within BBC Worldwide Productions and serves to identify new formats created and produced under the company’s umbrella.