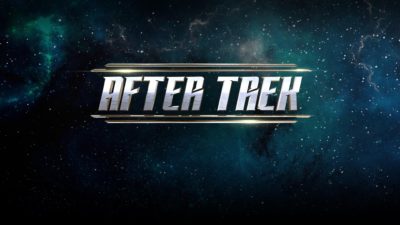 After Trek – the live Star Trek: Discovery after show will premiere following the Trek series’ premiere on Sunday, September 24th (11/10C), on CBS All Access.

“AFTER TREK” Will Be Hosted by Matt Mira

AFTER TREK will serve as the ultimate weekly forum for “Star Trek” fans, with in-depth discussions and recaps of the latest STAR TREK: DISCOVERY episode. Each AFTER TREK episode will feature host Matt Mira talking in-studio or via video feed with STAR TREK: DISCOVERY cast members and crew along with past “Star Trek” talent and celebrity fans. While watching, fans will be able to “engage” with the show via social and other interactive elements by using the hashtag #AfterTrek.

AFTER TREK host Matt Mira is a founding member of the Nerdist team and also stars in his own show “Sidekick with Matt Mira” on Nerdist’s streaming platform, Alpha, which is returning for a second season. Mira is currently a writer for the ABC comedy “The Goldbergs,” and his other credits include being a staff writer for Comedy Central’s @midnight and a host on G4’s “Attack of the Show.” In addition to co-hosting the Nerdist Podcast, Matt is the host of many podcasts, including “James Bonding,” “Star Trek: The Next Conversation,” and “Matt and Doree’s Eggcellent Adventure,” where he and his wife detail their struggles with infertility.

STAR TREK: DISCOVERY will follow the voyages of Starfleet on their missions to discover new worlds and new life forms, and one Starfleet officer who must learn that to truly understand all things alien, you must first understand yourself. The series will feature a new ship and new characters, while embracing the same ideology and hope for the future that inspired a generation of dreamers and doers.