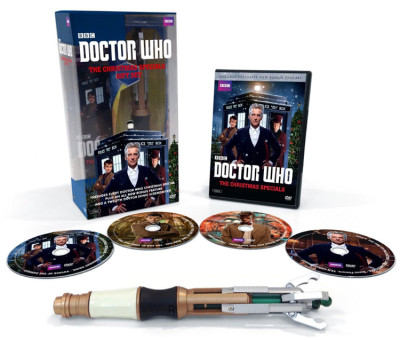 So along comes Russell T. Davies with the mad idea of doing a Christmas Special for Doctor Who every year.

Right out of the block he comes up with The Christmas Invasion – a killer idea that the Doctor’s regeneration is not going well – leaving Rose Tyler (Billie Pipper), Mickey Jones (Noel Clarke) and Rose’s mum, Jackie (Camille Coduri) to do the heavy listening until a pajama-clad Doctor (David Tennant) can save the day.

The Christmas Invasion – Grade: A-

In short order the Doctor finds himself dealing with a runaway bride (introducing Donna Noble!); then we come to Voyage of the Damned in which the Doctor tries to a space bound replica of the Titanic and Kylie Minogue (one out of two’ not bad…); The Next Doctor (again written by Davies) in a Victorian man calling himself the Doctor, goes about helping people when their troubles get too big, and The End of Time: Parts 1 & 2 (the final Davies Christmas Specials) in which the Doctor’s darkest frenemy, The Master, returns.

Voyage of the Damned – Grade: A+

The Next Doctor – Grade: B+

When Steven Moffat took over running Doctor Who, he cheerfully accepted the responsibility of writing the show’s annual Christmas specials. He certainly wasted no time getting into the spirit with very Dickensian tale (if Dickens had had sharks swimming through the air) called A Christmas Carol. Then came the very C.S. Lewisian The Doctor, The Widow and the Wardobe – WWII relocation and a war with non-Terran soldiers, with a magic wardrobe. In Moffat’s The Snowman, The Doctor tried to return, but a resourceful Victorian girl and a unique team of detectives managed to kickstart his curiosity (Madame Vastra, Jenny and Strax deserve their own series!).

A Christmas Carol – Grade: A

The Doctor, The Widow and the Wardrobe – Grade: A

The Time of The Doctor finds The Doctor trying to protect a mystery world while Clara cooks Christmas dinner. One of Moffat’s best holiday tales, it manages to be hilarious (Hands!) and poignant (Clara begging the Time Lords to break/change the rules and grant the Doctor one more regeneration. And finally, we come Last Christmas – an episode where nothing is quite what we think it is – including Nick Frost’s Santa Claus in what is one of the most unusual alien invasion stories ever.

Time of the Doctor – Grade:A+

Doctor Who: The Christmas Specials only has two bonus features – one on a DVD and one decidedly not.

Features: The Ten Christmases – a moderately, funny but otherwise pretty average seventeen-minute featurette in which comedian Rufus Hound attempts to discover what makes a for a perfect Doctor Who Special; a life-size replica of Doctor Twelve’s Sonic Screwdriver – it expands and contracts and makes the correct sound when pressure is applied to a pressure sensitive band.

Doctor Who: The Christmas Specials – Grade A