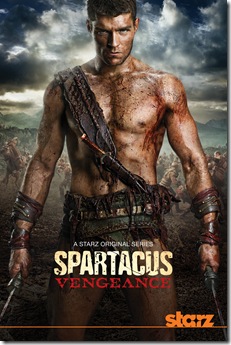 SPARTACUS Returns With a ‘Vengeance’

Spartacus: Blood and Sand’ premiered on STARZ in January 2010, and quickly became one of the most talked about shows on television. The first season ended in an explosive finale, ‘Kill Them All,’ as Spartacus led a brutal rampage at the House of Batiatus that more than fulfilled the promise of the episode’s title.

‘Spartacus: Vengeance’ begins just a few weeks after that massacre. Capua is in an uproar.  The gladiators have escaped and formed an uneasy alliance. Spartacus wants to exact revenge on the man responsible for killing his wife, but he will soon understand his life is about something greater than avenging Sura’s death. His mission is to build an army, set free the slaves and topple the Roman Empire. STARZ Originals newest series ‘Spartacus: Vengeance,’ premieres Friday, January 27th at 10pm ET, only on STARZ.

Season two also brings the return of “Blood and Sand” cast members, Craig Parker (The Lord of the Rings Trilogy) as Gaius Cladius Glaber, the Roman commander who condemned Spartacus to slavery, and his alluring and cunning wife Ilithyia (Accidents Happen), played by Viva Bianca. Actress Cynthia Addai-Robinson (Dirt) joins the series as Naevia, the former body slave to Lucretia who was banished from the Ludus for engaging in a love affair with Crixus.

Premiering exclusively on STARZ, ‘Spartacus: Vengeance’ is produced by executive producers Rob Tapert (The Grudge, Xena: Warrior Princess and Hercules: The Legendary Journeys), Steven S. DeKnight (Buffy the Vampire Slayer), Sam Raimi (Spider-Man and The Evil Dead), and Joshua Donen (The Quick and the Dead). This same conceptual creative team behind the highly anticipated ‘Spartacus: Vengeance’ also produced the first two installments of the series: season one, ‘Spartacus: Blood and Sand,’ and the prequel, ‘Spartacus: Gods of the Arena.’