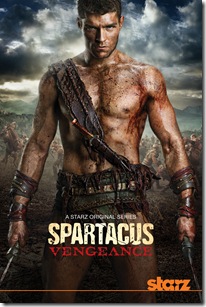 Spartacus: Vengeance opens with a quick text update of the situation – the House of Batiatus has fallen; a young noble has dispatched mercenaries to track down and kill Spartacus [Liam McIntyre] and his rebellious fellow slaves – and moves quickly to a spectacular action sequence as Spartacus and his fellow former gladiators dispatch a patrol of eight of those mercenaries with extreme prejudice. Spartacus takes time to carve a ‘message to an old friend’ on one corpse’s chest.

In Rome, we learn that the legate Gaius Claudius Glaber [Craig Parker] has been elevated to the Senate – and the title of Praetor. Sadly, news of Spartacus’ message has reached Rome and Illythia’s [Viva Bianca] father sees to it that Glaber and his wife return to Capua to take care of the situation.

Once in Capua, Glaber takes over the former home of Batiatus – appalling Illythia, who orders everything in the home to be pitched off the cliff outside before becoming distraught at what she thinks is a ghost. Lucretia [Lucy Lawless] yet lives, though seemingly driven mad by her experience.

The season premiere of Spartacus: Vengeance, Fugitivus, finds Spartacus and his fellow slaves killing and robbing the bodies of the mercenaries dispatched against them as they arm themselves for the future. There are quarrels between factions within the group, the Gauls not being the sharing sort unless ordered by Crixus [Manu Bennett]; Crixus wanting to find Naevia, his lost love who was sent away by Batiatus, and Spartacus seeking vengeance for the death of his wife.

Neither Crixus nor Spartacus wishes to abandon their desires, though Crixus’ search would take the slaves farther from Capua and, therefore, into locales where they might better their provisions and gain even more weapons. Even Mira [Katrina Law]consuls Spartacus to take this wiser path, but news of Glaber’s plan to address the people of Capua sends him the marketplace, alone, seeking vengeance.

Meanwhile, Oenomaus/formerly Doctore [Peter Mensah] melts into the shadows, avoiding contact with anyone as much as he can – until he’s braced by three profit-seeking but not too bright bravos.

This is not the situation we’re used to from the first season and prequel of the Spartacus sage. The escaped gladiators and house slaves are hiding in the sewers and venturing out at night; Glaber and Illythia are taking up residence in a house seen to be cursed – though the revelation of Lucretia’s survival changes that. Both in both cases, the people involved are living in foreign places and are hard-pressed to make the most of the situations they’re in.

As we’ve come to expect, Spartacus looks great. The cinematography and the CG environments are grand and, occasionally glorious. The violence is amped up to previously unseen levels [when broken bone poke an arm’s skin at one point and another mercenary has his head repeatedly bashed against a gravestone, provoking Spartacus to say, ‘He’s dead, Agron.’

Fugitivus is filled with blood and sex and, as in season one and the prequel, both the sex and violence serve the story in more than merely prurient ways. The violence, which was a staple of Roman times, reminds us that the Romans’ idea of civilization wasn’t anything like ours – and the quickest way to get political statements to their intended targets, among other things.

The sex continues to be as much political and cultural coin on top of being a form of entertainment and an expression of affection/love.

What is even more remarkable, the language in Fugitivus adds further depth to the odd idiosyncrasies that have been developed to make Latin more interesting and intelligible to the viewer.

It still sounds a bit awkward, but not as nearly awkward as classical Latin might have done [and hence, no subtitles!].

The cast is pretty much its usual talented self, with the only real question being rather the new guy, Liam McIntyre, would be acceptable as the new Spartacus. Andy Whitfield gave his stamp of approval and it only takes the teaser of Fugitivus to see him in action so that, by the time he utters a line, he really Spartacus. Indeed, he has a wilder energy that seems appropriate for a man teetering on the brink between honoring his promise to lead the slaves and charging off after Glaber.

Lucy Lawless is bit of a revelation here. With Lucretia seemingly made mad by her ordeal, Lawless goes smaller, more intense and cunning. As one blessed by the gods, she is just about perfect.

Tom Hobbs makes Seppius, an arrogant minor noble, so cocksure is he that he can put an end to Spartacus that it’s a good thing he has his sister, Seppia [Hannah Mangan Lawrence] to cut him down to size verbally. And from some of the looks Seppius casts in her direction, one wonders if they might share a bedroom, to boot.

Fugitivus was written by series creator Steven S. DeKnight and directed by Michael Hurst. It’s a fast-paced [thin bat out of hell rather than NASCAR] hour that plunges us immediately into the heart of the action and never lets us go.

By Spartacus’ promise that ‘the gods shall weep for their blood,’ I don’t think he’s speaking hyperbole!

And next week, we get to learn all about Oenomaus became a gladiator. How cool is that?