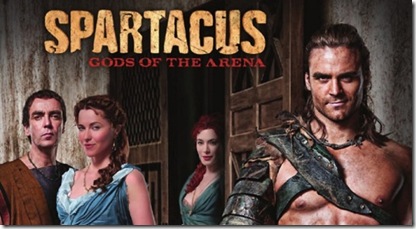 Past Transgressions opens with a flashforward that encapsulates blood and sand, season one, right up to the death of Batiatus [John Hannah] and Lucretia [Lucy Lawless]. From there, we cut to a fight in a much smaller arena than we saw in Blood and sand – and a pair of gladiators having at each other.

When the combat ends, two more gladiators enter the arena – one helmeted, with shield and sword; the other, gloriously handsome, wearing little armor and wielding two swords. This is Gannicus [Dustin Clare], and he exults in the roar of the crowd. Once the fight begins, he moves like a panther, but once he gets his man down, instead of finishing him, he plays to the crowd – savoring the young woman who flashes her breasts at him. Distracted, he barely avoids losing an arm to his opponent, suffering barely a nick. Drawn painfully back into the fight, he plunges his swords into the arena’s floor and pummels his opponent with his bare hands before regaining his swords and ending the contest.

Meanwhile, Batiatus is lamenting the fact that the magistrate and another important personage weren’t there to see Gannicus’ victory – making it almost impossible to get his best gladiator into the lists for the opening day of the new arena that we seeing being built in the middle distance.

He tries to curry favor by buying a miserable slave from his competition– a ratty-looking Crixus [Manu Bennett] – whom he places in the training at the ludus, under the watchful eye of Doctore, a holdover from when Batiatus’ father ran it.

Adding intrigue to the proceedings is Gaia [Jaime Murray], a recently widowed old friend of Lucretia’s who has just returned to Capua. Just one look at her and we can tell she’s going to be trouble – and no small amount of fun.

Past Transgressions marks the beginning of Batiatus’ rise in the social order of Capua, and we see him making bold moves to gain a place in more favorable company – ranging from a fight between Gannicus and one of a rival’s gladiators in a marketplace [talk about a primal version of the mall tours that made teen idols like Tiffany famous!]. At this point in time, he’s even partners with Solonius [Craig Walsh Wrightson] – who also came to a bad end in Blood and Sand.

Like Blood and Sand, the action in the arena [and, frequently, outside it] is pretty savage – and has the feel of a graphic novel like 300. The politics of the town play heavily into the proceedings as well – though some of the sex seems to be politics free [but when it’s not, there’s probably an herbal reason for it…].

In Past Transgressions, DeKnight is smart enough to hold our attention with detail as well as brawn/sex – note the way mundane touches of everyday Roman life [like the public toilets and the slave traders] fill in the background, or are cleverly used to give depth to conversation.]

The fight sequences are at least as brutal – and as beautifully choreographed – as those in Blood and sand, and give us a chance to see a future champion of Capua who is not Spartacus or Crixus, while setting the stage for the latter as an epic rise to glory.

From Past Transgressions, it seems like the cast is as uniformly excellent as in Blood and Sand [though Williams’ Vettius hasn’t been given much to do beyond sulking and preening]. Probably the most intriguing chemistry is between Murray and Lawless – old friends who may have shared, shall we say… benefits?

Despite being a prequel, though, the Gods of the Arena premiere does not require the massive amounts of exposition that were necessary for Blood and Sand, and so the series gets off to a much quicker start – and director Jesse Warn maintains a good pace throughout – resulting a sword and sandal epic that feels both epic and intimate.