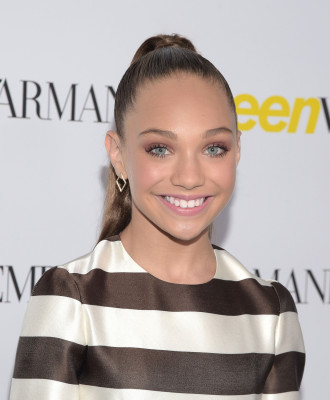 Best known for the program Dance Moms and as the dancing mini-Sia in Sia’s music video trilogy , 13-year old Maddie Ziegler is joining Nigel Lythgoe, Paula Abdul and Jason Derulo as a judge on FOX’s So You Think You Can Dance: The Next Generation – which features competitors between the ages of 8-13.

SYTYCD:TNG premieres on Monday, May 30th (8/7C). Follow the jump for more.

THIRTEEN-YEAR-OLD MADDIE ZIEGLER TO SERVE AS JUDGE ON “SO YOU THINK YOU CAN DANCE: THE NEXT GENERATION,”

Award-winning dancer Maddie Ziegler will join Nigel Lythgoe, Paula Abdul and Jason Derulo as a judge on SO YOU THINK YOU CAN DANCE: THE NEXT GENERATION. Ziegler will lend her expertise as a young dancer to critique and praise the contestants as they battle it out during the studio shows this summer.

SO YOU THINK YOU CAN DANCE: THE NEXT GENERATION premieres Monday, May 30 (8:00-9:00 PM ET/PT), on FOX. The new season will feature a younger generation of dancers between the ages of 8-13, who are skilled in various dance styles, such as contemporary, tap, hip-hop, ballroom, animation or breaking. The dancers will be paired up with All-Stars to compete for the title of America’s Favorite Dancer.

Best known for starring in the award-winning reality series “Dance Moms,” 13-year-old Maddie Ziegler has gone on to star in singer-songwriter Sia’s music video trilogy. She has had the honor of performing artistic contemporary routines on “Saturday Night Live,” the Grammy Awards (2015), “The Ellen DeGeneres Show” (three times), “We Can Survive” at the Hollywood Bowl, “Dancing with the Stars” (twice) and “Jimmy Kimmel Live.” She also is making a name for herself as an aspiring actress with roles on such hit television shows as “Pretty Little Liars,” “Austin & Ally” and “Nicky, Ricky, Dicky & Dawn.”  She will be making her big screen debut in the upcoming feature “The Book of Henry,” starring opposite Naomi Watts and directed by Colin Trevorrow. Ziegler also recently took home a People’s Choice Award, winning the DailyMail.com Seriously Popular Award.

Auditions for SO YOU THINK YOU CAN DANCE: THE NEXT GENERATION have begun and head to Chicago next week (Friday, March 11), followed by New York (Friday, March 18). Please visit fox.com/dance for more information about Season 13.

During auditions, the next generation of dancers will compete for a place at “The Academy,” where only the most talented will be selected for the next round of competition. At the end of the round, the best of the best, the Top 10 dancers will be partnered permanently with a SYTYCD All-Star. The competition then moves to the SYTYCD studio, where, with Ziegler and the returning SYTYCD judges watching their every move, the top youngsters will compete each week in a variety of styles, working and performing alongside their All-Stars with world-renowned choreographers. As the competition heats up, contestants will be eliminated until a winner is named on the season finale.

Visit the official SO YOU THINK YOU CAN DANCE site at fox.com/dance to view exclusive videos and photos. “Like” SO YOU THINK YOU CAN DANCE on Facebook at facebook.com/SoYouThinkYouCanDance. Follow the series on Twitter @DANCEonFOX and join the discussion using #sytycd. Follow host Cat Deeley at @catdeeley, and follow the judges Nigel Lythgoe @dizzyfeet, Paula Abdul @PaulaAbdul, Jason Derulo @JasonDerulo and Maddie Ziegler @maddieziegler.