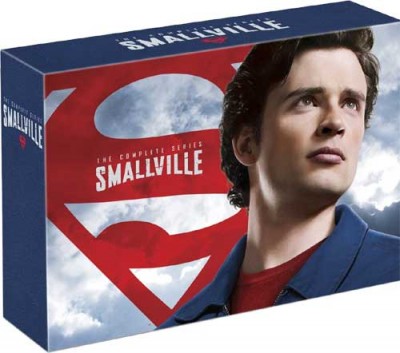 Smallville is one of the all time great television shows that works so much better in marathon viewing than individual sittings. After four years of watching, I bailed at season 5 and by chance started up again in Season 8. This the quintessential hero’s journey fable as we watch young Clark grow to become the man that we all know he will be. We all knew/know what the ultimate destination will be but the way the writers/producers went about telling this story with all the unique twists and turns is one for the books.

The two-hour series finale is one of the best ones in TV history. Every question is answered, no lose ends, when he finally dons the red and blue and flies, you can’t help but get chills. The series finale also makes you glad that you went on this journey because even though it seemed like it, season to season, the Writers and Producers of this show really did seem to have a clear roadmap of where they wanted to go and end up.

Michael Rosenbaum’s portrayal of Lex Luther was flawless. It actually was heartbreaking to see his inevitable fall. He was a villain that is hard not to root for, because I wanted to see Lex not go down this path, he showed a lot of moments of humanity and for the first time in Superman Mythos we actually got a chance to see that yes, they were real friends. You cannot even entirely blame Lex for his downfall – his combination of bad parenting and trust issues is really what brought it on. I loved seeing this aspect of Lex. The show suffers in the first few seasons because Clark’s infatuation with Lana becomes a bit tedious by season 3.

The supporting cast really picked up the slack and became just as important and vital as Clark. Alison Mack was always brilliant as Clark’s long time best friend Chloe Sullivan, I loved the brilliant way they handled new character Tess Mercer (Cassidy Freeman), Erica Durance gave Lois a lot unexpected depth, and Justin Hartley’s Oliver Queen was an unexpected bonus addition to the cast. The always conflicted Tess Mercer (Cassidy Freeman) became one of my favorite characters because she was so complex and hard to read. 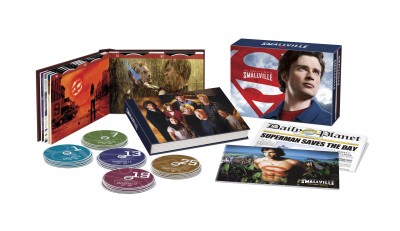 As good as the show is, as someone who owns most of the individual DVD and Blu-ray sets, I really wanted a complete nicely organized boxed set. I love the two full color books that the discs come packed in but they are in so tight that it is nearly impossible to get them out of the sleeve without either tearing the discs or tearing the sleeves.  The set also comes with a gorgeous episode guide and a full, real, edition of The Daily Planet newspaper (complete with a comics section).

I’m not sure if this is true Dolby digital audio or not but the audio mix of the DVDs sound nice on my surround sound set up. I love that they seemed to have kept all the original music intact (as far as I can tell). The video is sharp on my PS3, which does an excellent job of upscalling DVDs.  Some colors in the earlier seasons look a bit muted and some of the extras on the individual DVDs get lousy transfers. Extras are sprinkled on DVDs throughout the set.

Extras deleted scenes; some commentary tracks and featurettes are sprinkled throughout the set. There are two additional discs that include just bonus material.

This is a really strong television series set with a great collection extras. It is ruined by the fact that the discs are in there so tight that it is extremely difficult to get them out of their protective sleeves. You would be better off purchasing the individual seasons and then getting the Blu-ray sets for seasons 6 – 10.