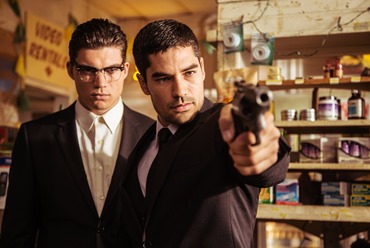 Robert Rodriguez’s El Rey network has released a trailer for its first original production, From Dusk Till Dawn: The Series. Truth to tell, it looks like some pretty bada$$ fun. I particularly love the remarkably subtle hints of the supernatural madness to come…

Check it out, along with the press release, after the jump. From Dusk Till Dawn: The Series premieres March 11th (9/8C).

El Rey Network released today the first official trailer from the supernatural crime saga, “From Dusk Till Dawn: The Series,” premiering March 11th at 9pm ET/PT. The network’s first scripted original on Robert Rodriguez’s new genre-busting cable network, the series is based on the thrill-ride film of the same name. The 10-episode serialized drama is centered around bank robber, Seth Gecko and his violent, unpredictable brother, Richard “Richie” Gecko, who are wanted by the FBI and Texas Rangers Earl McGraw and Freddie Gonzalez after a bank heist left several people dead. While on the run to Mexico, Seth and Richie encounter former pastor Jacob Fuller and his family, whom they take hostage.  Using the family RV to cross the border, chaos ensues when the group detours to a strip club that is populated by vampires.  They are forced to fight until dawn in order to get out alive.

“From Dusk Till Dawn: The Series” is an El Rey Network production in association with Rodriguez International Pictures, FactoryMade Ventures and Miramax. Executive producers are Robert Rodriguez, Carlos Coto (who is also showrunner) and FactoryMade Ventures and El Rey Network co-founders John Fogelman and Cristina Patwa.  Diego Gutierrez is writer and co-executive producer.  Robert Rodriguez will direct the first, second and fourth episodes.

Miramax, producing studio and distributor of the original film, is distributing the series internationally in all territories.

Entertainment One Television (eOne) and El Rey partnered earlier this week on an exclusive worldwide distribution agreement whereby eOne will represent DVD and EST rights in the US and Canada for “From Dusk Till Dawn: The Series” and will handle all media rights, with the exception of broadcast rights, for El Rey Network’s slate of upcoming originals.